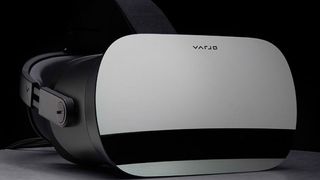 The Varjo VR-1 is the world’s first virtual reality headset to offer “human eye resolution,” according to the company.

Earlier this year, Helsinki, Finland-based company Varjo introduced its VR-1 headset, which was designed to overcome the longstanding impediment to visual immersion in virtual reality (VR): low resolution. Designed for high-end industrial use, the VR-1 features “human eye resolution” of 60 pixels per degree, which the company says is 20 times greater than any other headset available on the market.

According to Varjo’s CEO, Niko Eiden, the VR-1 was engineered to go far beyond the consumer-oriented devices currently available. “You look at the existing headsets today on the market, and what you see is pretty horrible from a resolution perspective,” he said. “The big factor is the rendering capabilities—they are not made to render 360-degree images in high resolution.” Rather than using the traditional approach of one display per eye, the VR-1 utilizes two per eye, with a very high-resolution one—dubbed the “Bionic Display”—at the center of the field of view. “So, even though we’re offering very high resolution at the center of the display, we’re able to keep the computing load low enough so that there are existing desktop machines and laptops that work with our headset,” Eiden said.

Eiden said that the headset’s display was engineered from off-the-shelf components, combined in a unique way. The lower resolution display is comparable to the resolution of a typical VR headset, and provides the full field of view and peripheral vision. “Then we have an optical combiner, which is basically a 45-degree mirror,” Eiden said. “So, from the side, we can project the center display, and that is a very high-density 0.7-inch Sony high-quality micro OLED. And with that display we can match the human eye resolution.”

Eiden said that the VR-1’s resolution enables far greater sophistication in fields like training and simulation. “If you want to train a person, for example, in a control room, you would like the person to see the instruments, be able to read virtual displays, and interact, and that hasn’t been possible with existing headsets.”

Taking things a step further, the VR-1 also incorporates sophisticated stereo eye tracking technology with sub-degree accuracy, allowing trainers to glean insights from the simulation experience. “You can figure out whether the person you’re training is looking at the right point,” Eiden said. “For example, in pilot training, did the pilot see the warning light?”

Other fields the VR-1 is enhancing include architecture and industrial design, especially in the automotive field. “For designing a car and accelerating the process of design, VR is a very valuable tool,” Eiden said. “They can also use it to allow their customer to configure a future car model that they’re ordering and see it in VR before they actually press the order button.” Companies currently employing the headset include AirBus, Audi, Saab, Volkswagen, and Volvo.

As revolutionary as the VR-1 is, Eiden said that it’s actually just the first step in the company’s mission: to create the best possible mixed reality (MR) hardware. “The idea was to do mixed reality with pass-through video cameras, with proper resolution and very low latency,” he said. “That was the first demo that we built that got investors interested in it, but fairly quickly we realized we had to first fix the virtual reality side of things.”

With that now accomplished, the company is on track to release an add-on later this year that replaces the VR-1’s front plate with an MR-enabling module. “That’s when things are going to get really interesting,” Eiden said.

The VR-1 is shipping now for a retail price of $5,995 and a yearly service fee of $995, and is only available for businesses and academic institutions. Eiden encourages those interested in a demonstration to check Varjo’s website for upcoming trade events at which the company will be exhibiting. The next show in the U.S. is Augmented World Expo 2019, which will be held May 28–31 in Santa Clara, CA.