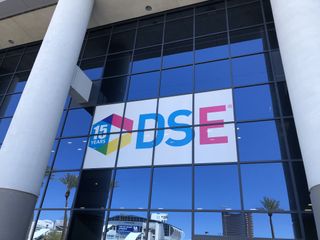 Whether it’s direct-view LED, system on a chip, projection mapping, ultra-cool haptic-touch interactivity, or King Data, the overarching trend from Digital Signage Expo 2018—which was held March 26–29 in Las Vegas—is that these technologies and solutions are for real. Do you have a place for them—and a plan?

From the likes of Absen, LG, NanoLumens, NEC, Leyard and Planar, Sharp, and Samsung, more than 20 exhibitors at DSE showcased direct-view LED solutions. The display technology that was once only known for massive Times Square or sports stadium boards is now making a play for the indoor video wall.

Reduction in cost, smaller pixel pitches, scalable sizes, and increased image quality have aligned to make direct-view LED a disrupter for indoor spaces such as corporate lobbies, boardrooms, and even the cinema.

The buzz at trade shows of the past had been which display manufacturer had the largest flat panel display. “That kind of died off,” said Garry Wicka, head of marketing, LG Displays. “What you’re starting to see now is still big displays, but you have different technologies that are enabling it.”

Advanced technologies are providing more options, not just from LG. “You’re starting to see others come out with technologies, and it’s great because it’s helping the overall industry think, ‘Okay, I can [provide] a better image, I can [provide] a better product. Higher resolution and different types of format give that wow experience,’” Wicka said.

Nevertheless, the price of direct-view LED display technology is still a barrier, compared to LCD. “The cost is still probably a 10-times multiplier or more in comparable size, but it once was maybe 50 to 100 times,” said Todd Fender, senior manager of product marketing at Samsung Electronics America. “It’s still expensive technology, but what you get out of it is incredible, because the life expectancy on LED is 100,000 hours.” The common refresh cycle on LCDs is three to five years; today’s LED technologies are still so new, one can only estimate their pracdtical working lifespan. “On a direct-view LED, it could be 10 years—you just don’t know.”

Display manufacturers are taking a bite out of companies offering standalone media players with system-on-chip (SoC) architecture. This is an area in which Joe Giebel, sales director at Four Winds Interactive, feels display manufactures are becoming more relevant. “The technology behind SoC is getting to a place where we can cache content,” he said. “We can monitor and do the deployment that you’re used to on a more robust player. I think you’re going to start to see everyone with a digital signage deployment consider looking at the cost savings of the system on a chip, and not have the external player.”

Whether it’s LG’s webOS, Samsung’s Smart Signage Platform, or the myriad of other SoC solutions, this trend is going to resonate with AV/IT technology managers. “Leveraging the system chip eliminates the need for the single most failure-prone point in the system, which is a media player,” said Stephen Choi, vice president at Samsung.

DSE marked the first public showing of the Sharp Open Architecture Platform for SoC. “As of DSE 2018, there are globally 17 different CMS providers supporting the Sharp Open Architecture Platform,” said Gary Bailer, director of product planning and marketing, Pro AV Products, Sharp Imaging and Information Company of America. It’s the combination of SoC and very high resolution that will begin to have an impact. “We’re going to start seeing that in a lot of vertical applications, such as command and control,” Bailer said. “We see it in medical imagery, teaching hospitals, and in surveillance.”

Lest you think that projection is dead, meet Richard Ventura, vice president of NEC Display Solutions and chairman of the Digital Signage Federation. During DSE he had several conversations with end users asking, “How do I do projection mapping? Can we use your software? How do I do warping? Whom do I work with to do all that stuff?” Some of the most spectacular experiences are created using projection mapping.

Ventura sees spaces using a combination of display technologies, and pointed to the NEC booth, which showed a mixed-use technology wall with projection mapping illuminating graphics onto athletic shoes and an LCD wall delivering messaging. “I’ve been talking with experience design consultants,” he said. “They’re looking at how can they can use technology differently. It’s not a rectangle anymore, and it’s not even a circle. It’s just looking at the space and how we can change it.”

No longer is interactivity limited to touch. In the back of the hall at DSE, newcomer Ultrahaptics unveiled its technology that projects sensations into the air using ultrasound. Users can “touch” and interact with digital content in free space with their bare hands, without the need for gloves or wearables.

As interactive technologies have matured, more manufacturers showed a wider range of options and compatibility with third-party software and devices. LG’s new IPS Interactive Digital Boards are compatible with and include Crestron Connected, Cisco, and Hoylu.

More products are combining intelligence and interactivity. “They have network capability and wireless ability built in, Bluetooth, near-field-communication (NFC)—and all of that creates a smart environment,” Bailer added.

How to create and manage content been a major focus within the digital signage industry for several years. As this area has matured, the emphasis is moving to gathering data from digital signage experiences. “You always hear everyone say, ‘Content is king,” Ventura said. “I can tell you right now, content is not king; data is king. Whoever owns it, whoever can parse it, whoever can map it out, that’s who’s actually going to own the space.”

Four Winds Interactive’s Giebel agreed. “We talk to clients about putting information in front of people.” Gathering data and having the ability to analyze it don’t always align. Some companies offer visualization dashboards. “You really only have 10 percent of your company that knows what to do with the data.” Dashboards can help this process. “How can those folks and analysts really boil it down to say, ‘This is what’s important. This is what you should take away from this giant report.’”