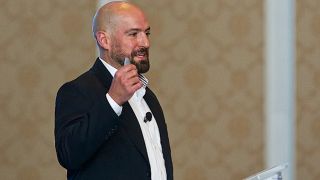 During the recent Crestron Masters program in Rye Brook, NY, AV Technology had the opportunity to talk with Nic Milani, executive director, Cloud Solutions at Crestron Electronics. Before joining Crestron in August, 2015, he was the director of Technology Solutions at Herman Miller.

He shared a story that, on some scale, we’ve all lived. While at Herman Miller, Milani's team had done hours of prep for a client presentation. “We walked into the room where the client is going to actually show up in 15 minutes, walk up to the touch screen, hit it, hit it, and nothing is working. You can watch the anxiety levels start to rise with the half-dozen executives in the room. The confidence was turning to panic,” said Milani. You won’t be surprised by the answer, when he asked what was wrong with the presentation system. The manager replied, “Oh, it hasn’t worked in three months.” Milani responded with the rhetorical question, “Why haven’t anyone fixed it?” Reply: “Well I don’t know who to call, and when I send emails they don’t do anything.” Still reeling from the experience two years earlier, Milani recalled, “It’s like, you’re now jeopardizing a potential multi-million-dollar account because somebody can’t display on the screen. And it wasn’t a failing of the hardware—what happened was people started to rip cables out of the screen and…,” you know the rest of that familiar story.

Milani is on a mission to ensure that scenario is not be repeated—for anyone. “The idea with Crestron Fusion Cloud is that it allows us to proactively monitor and avoid those issues in the first place. When somebody starts ripping a cable out, you’re going to get a notification.” In the case of the ill-fated presentation, Crestron Fusion Cloud would have alerted tech support of an equipment failure when the room had issues three months earlier.

Room control and GUI standardization has been an AV industry mantra for many years, but achieving that has not always been so easy. “That’s one of the things that I think plagues the industry, that I’ve seen, is because it’s historically been a project or a room focus, part of what we’re doing is elevating the discussion to, ‘it’s not just about that one room functioning in a specific way; it’s about all the rooms in your portfolio functioning in a consistent manner.’”

This is where cognitive performance comes into play Milani suggested. “When we have those experiences and those disruptions it’s like throwing a rock in a calm pond with the waves representing the disruption—it throws people off. Everybody has a different tolerance to survive that. You could see with those executives in the room; now all the prep work we had done had been destroyed because of that little experience.”

Taking a step back in the meeting process is where Crestron PinPoint personal scheduling app comes into play. “I think what most people benefit from, is the scheduling portion, and improving the ability of employees to navigate the day. PinPoint leverages information that’s in the Fusion system to provide the data in your hand, and what that allows you to do is, because it knows where I am it offers just the rooms that are closest to me.” The app helps potentially wandering meeting participants find appropriately sized available meeting spaces, with the AV equipment needed.

PinPoint is only one example of mobile device integration at Crestron. “One of the things that really excited me about joining Crestron was that we really can deliver on the Internet of Things because our hardware fundamentally stitches together those things,” said Milani. “Fusion is a database. It sits in the middle of lighting, shades, the building management system, your calendaring system via Exchange or Google; all the AV equipment, the videoconferencing, audio systems, and the list goes on and on,” he explained.

With nearly 700 of its premier programmers in attendance during this year’s Crestron Masters, for the first time, four Diamond-level programming achievement awards were presented. Achieving Diamond-level represents 12 years in the Masters program, more than 300 hours of training, as well as completing and presenting complex programming projects.

Editor’s Note—We are thankful to not include the formidable set of acronyms that come with Diamond-level status. Might we suggest when achieving this level, an “nth” is all that is needed.