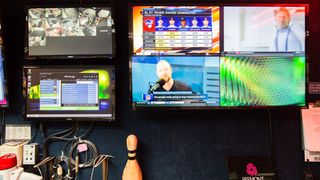 Located in Fremont, CA, the Cloverleaf Family Bowl has something for everyone. In addition to 44 lanes of bowling action, Cloverleaf hosts local bowling leagues, birthday parties, special events, and even community fund-raisers for worthy causes. Add Cloverleaf’s accessibility for physically disabled bowlers, and this is a recreational facility on top of its game—including the use of 21st century AV technology to keep bowlers informed and entertained.

Now Cloverleaf Family Bowl wasn’t always a beacon of advanced AV. In fact, before Cloverleaf owner Jim Chambers called Bruce Green of Arete Audiovisual Design of Brentwood for help, this family bowling alley was a bit of an AV wasteland.

For instance, the music volume over Cloverleaf’s loudspeakers had to be kept almost inaudibly low, due to fears of putting the amplifiers into overload and shutting down. The video on the old SDTVs around the Cloverleaf facility got fuzzier the further you got away from the original distribution point. And if you wanted to change the channel on one of three DIRECTV SDTV satellite tuners (all connected to one dish), you had to turn two of them off, in order to use the remote to control the third one.

“This was one seriously impaired AV installation, the result of poor initial design and years of handyman add-ons without any kind of integration plan,” said Green. “This made bringing Cloverleaf Family Bowl’s AV installation to a professional 21st century level a really big challenge, to put it mildly.”

Initially, Bruce Green was brought in to address problems with Cloverleaf’s paging system. His success resulted in Chambers hiring him to fix the bowling alley’s problem-plagued audio and video distribution/playback systems. Here’s how Green did it.

Phase One: Can You Hear Me Now?

The paging system’s problem was due to processor problems. “For some reason, the existing Penton Audio processor couldn’t be updated,” said Green. “This meant that the system locked up when they tried to page someone within one of Cloverleaf’s 12 paging zones.”

Fixing the paging system was easy, especially because Green had worked with Penton Audio paging technology in the past. “I just pulled the old processor out, put a new one in, and it worked,” he said. “But fixing the music playback system? That was something else entirely.”

The problem: The Cloverleaf music system’s speakers were wired for mono reproduction using the old 16-gauge wiring from an earlier installation. Using this too-thin wire over the 250’ foot runs resulted in a voltage drop, effectively reducing the watts being delivered to the furthest speakers. Additionally, the existing wiring could not accommodate the number of speakers installed, which created an inefficient 2-ohm load at the amplifiers. In fear of overloading the Crest Audio amplifiers, “the Rane Digital processor was programmed to limit the SPL to marginal output levels,” said Green.

To resolve this problem, a total rewiring of the speakers was required using a larger 12-gauge wire. This increased the efficiency of the system by lowering the voltage-drop at the speakers, raising the impedance to a safe 4-ohm load and enabling quasi-stereo music reproduction. Four Lab Gruppen IPD2400 amplifiers, two Penton Audio UAP-G2 digital processors and a Furman P-8 Pro Series II power conditioner were integrated into the system to complete the upgrade. The four existing Crest Audio CC4000 dual-channel amplifiers were repurposed as subwoofer amplifiers.

Having revitalized Cloverleaf’s music/paging systems, Bruce Green was hired to bring HDTV to the bowling alley—and to banish fuzzy video pictures once and for all.

As well, Green installed three DIRECT HD satellite receivers—each with its own uniquely addressed code—a DIRECTV HD satellite dish, and a Denon Blu-ray player. The system is controlled by an RTI touch screen controller. “For our next phase, Cloverleaf owner Jim Chambers is considering upgrading the four Vivitek Projectors and screens,” he said.

Today, Cloverleaf Family Bowl’s AV system delivers clear paging messages, booming music, and crystal-clear HD video throughout the facility. “When it comes to measuring the success of a project,” Bruce Green observed, “it all comes down to the Big Smile on the owner’s face when you hit the switch and it all works!”

James Careless is a frequent contributor to AV Technology magazine.