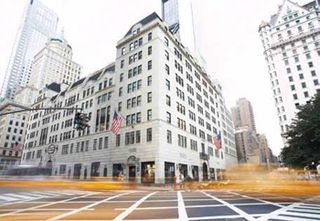 Located in the epicenter of New York City, Bergdorf Goodman is gradually shifting over to a fully networked AV system.Bergdorf Goodman is a one-of-a-kind destination for New Yorkers and visitors alike, where exclusivity, unparalleled service, and the very best of fashion are found on every floor of the venerable chateau-style building. For the last decade, Bergdorf Goodman has relied on the expertise of Greg Brion, principal of Innovative Sound & Vision, to periodically update the store’s sound systems, one of which resides on each of its 11 floors. Recently, Brion retrofitted the third floor of the men’s building with a foreground music system centered on the Ashly Pema processor and amplifier.

“Bergdorf Goodman throws a lot of private parties and events in its retail space, including rentals to designers and others,” said Brion. “Lately, we’ve been placing high-energy music at the forefront of the new designs. They want it ‘all about the music.’” Before beginning the new design, Brion checked in with Drew Milano at the John B. Anthony Company, which represents Ashly in the New York Metro area. “I’ve come to trust Drew,” he said. “Because I’ve used Ashly products successfully in the past, including several of their NE Series network amplifiers already at Bergdorf Goodman, I was already looking for an Ashly solution. Drew told me about the Pema, which combines processing and multi-channel amplification in a two-rack space unit. It’s very powerful and yet very affordable.”

As Brion cycles through each floor while the store is remodeled, he’s shifting the retailer’s sound reinforcement over to a fully networked system. Indeed, Neiman Marcus, Bergdorf Goodman’s parent company, gave the building a dedicated AV network. “It’s great,” said Brion. “I can jump on the network from anywhere and address all of the equipment in the most recent upgrades.” This newest upgrade makes use of Juice Goose IP-addressable power management, which allows the staff (or Brion himself) to hard reboot the entire system from the internet. A Netgear Unified Threat Management system allows access only to approved users, and a Netgear Smart Switch integrates all of the IP-addressable equipment. With Pema’s network-ready amplifier and processor package, Ashly fits in nicely with Brion’s theme.

Brion set up the Ashly Pema-4250, which delivers open-architecture eight-in by eightout Protea DSP matrix mixing with four 250- watt amplifier channels, using Ashly’s scheduler option to assist with energy management. “The music powers up when they open at 10:00 a.m. and powers down when they close at 8:00 p.m.,” he said. “It’s a convenience for them that’s easily overridden when they have an event.” To allow intuitive control of the system’s various inputs, which include music services, local players, and a DJ booth, and of the four zones of output, Brion supplied the staff with an eight-channel Ashly FR-8 Network Remote Fader control. Low-impedance QSC loudspeakers (ceilingmounted) and subwoofers (wall-mounted) convey the music with authority.

“I’ve had great support from Drew and from Ashly,” Brion said. “Any time I have a question, I get an immediate answer. As for the products themselves, Ashly’s functionality is all there, the reliability is something I can count on, and the price is right on point.” Brion is already drawing up plans for the first floor of the men’s department, into which he will place another Ashly Pema. Later in the summer, renovation of the second floor of the men’s department will begin, and again, he asserts a Pema will be the centerpiece: “By winter all three floors of the men’s department will use Ashly Pemas. Slowly, I’m turning the audio systems at Bergdorf Goodman into one Ashly-networked audio system.”