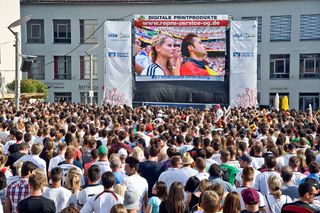 CASSIEOPEIA LEDMAN Optoelectric screens with Calibre PremierViewProHD-LED scalers
CASSIOPEIA’s Technology Manager, Martin Heuberger said, “We provided several LEDMAN Optoelectronic screens ranging in sizes from 5 to 28 square meters. For each screen, Calibre PremierViewProHD-LED scalers managed content and offered the reliability and stability that is so critical to these type of public events.”

Pauline Brooksbank, Managing Director at Calibre UK added: “The PremierViewProHD-LED is a dedicated LED screen image scaler with true broadcast-grade processing featuring the award winning Realta chip. Once again, CASSIOPEIA has deployed our technology that proves it can be trusted and relied upon in the most demanding applications.”