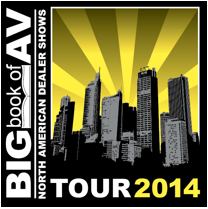 According to Kevin Kelly, president and COO of Stampede, the Scottsdale stop will also allow attendees to participate in the International Technology Retail Association (ITRA) Annual Member Meeting and the regionalInfocomm Roundtable Meeting that offers the opportunity for additional networking and CTS certified training.

“Every stop on the BBOAV Tour offers attendees an information-rich experience,” Kelly said, “and the Scottsdale stop goes even further by featuring two association events along with our own schedule of product demonstration andtraining sessions.”

In particular, according to Kelly, attendees will learn how they can immediately begin profiting from the new era of The Internet of Things (IOT). To further address the “Internet of Things” phenomenon, the Scottsdale stop will feature a designated area for IOT manufacturers, identified by pop-up banners and stands.

The Scottsdale stop will also feature a presentation by Sony on video conferencing and the wireless transmission of hi-def video. Each session will earn attendees .5 CTS RU Credit. Additionally, Stampede will be offering event incentives such as $500 Stampede credit, a $100 Restaurant.com gift card and a $50 gift card for attending the BBOAV Tour. Every attendee will also be entered into a drawing to win a 42-inch LG LCD HD television.

After Scottsdale, the Stampede 2014 Big Book of AV Tour continues through the spring on the following schedule: