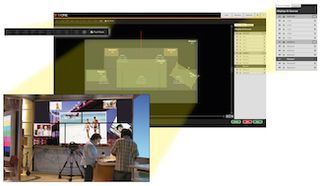 The What: tvONE will show its CORIOgrapher v2 video wall design software at InfoComm 2016.

The What Else: CORIOgrapher v2 software aids in the design process by allowing users to create video wall layouts from a PC without a connection to the CORIOmaster. Once designed, configurations can be uploaded into the CORIOmaster at any time using a direct connection or over the local area network.

When the PC with installed CORIOgrapher v2 software is connected to a network that contains CORIOmaster devices, it will automatically seek them out and list them as available within the software. CORIOgrapher v2 will allow discovery of CORIOmax devices on multiple networks at any time. Use the Local Area Network to update firmware on all CORIOmaster systems on the network. CORIOmaster’s DHCP capability makes this processes very simple.

CORIOgrapher v2 software enables users to set the exact dimensions of displays down to the millimeter or inch. Mixing of projectors and displays is also easy, as the system provides the ability to account for bezels and spacing between displays. Today’s LED displays vary significantly in size, pixel density, and resolution. To compensate, CORIOgrapher v2 features Pixel Mode, enabling exact mapping of the source content to the LED display wall.

CORIOgrapher v2's Real Time Dashboard provides the ability for instant triggering of saved presets and live routing of sources. Users can create a fullscreen or multi-window video wall layout, and save it as a preset to be recalled anywhere, anytime. Up to 50 presets can be stored and recalled.