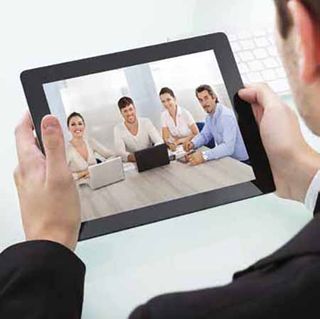 At least, it seems to be everywhere when I go to work.

Taking a quick glance around my office, I see four different monitors, a trio of desktop computers, a couple of video cameras, a desktop video conferencing system, and a robust network link that connects them all to the outside world.

For good measure, throw in a webcasting lecture capture appliance and BluRay player. It’s nothing short of video nirvana.

And since you happen to be reading this column in AV Technology, my bet is that you may even have more video toys scattered around your office. My second hunch is that you know a lot of people in your organization who would be willing to switch video seats with you, as well.

And yet here I sit, still wanting more. You’re probably hankering for more video toys, too. Indeed, we’re all surrounded by video gadgets and gear that would have been out of reach for the average business user just five years ago. And, yet, I can’t shake this nagging feeling that something even better awaits us on the video horizon.

Certainly, I’m not the only kid on the block who’s greedy about digital video toys. Business webcasting and streaming video have made light years of progress during the past five years, as well. The technology has evolved from an enterprise novelty into a viable communications tool.

As a result, many executives who previously would have had no interest in cameras, encoders, or green screens are suddenly emerging as full-fledged videophiles. Most notably, interest is high in pushing online video beyond the boundaries of the business desktop.

Today, fewer than one-in-five organizations have deployed technologies that make it possible for them to distribute online video content to smartphones and/or tablets, according to a fourth quarter 2013 survey of 1,007 executives fielded by Wainhouse Research. But another 25% of organizations represented in the survey targeted 2014 as the year for implementing mobile video distribution capabilities via tablets—with another 19% expressing interest in deployment via those devices.

Making mobile video happen, though, is no small technological feat. Real challenges face organizations in making sure video content is transcoded into the right format for use on a myriad of iOS, Android and Windows devices. And even when the video is transcoded, more hurdles must be crossed to ensure that the video content can be distributed on bandwidth-constrained wireless networks.

The challenge for video professionals comes in explaining just how difficult it can be to make video work in a mobile environment. Employees bring their smartphones to work; their expectation is that video should effortlessly flow to their device. If YouTube can make video work ubiquitously, then pervasive video should be within the reach of the IT department, right?

What about the EVP who wants business video on his or her iPad right now? Impatient executives don’t think about the need for good transcoding, elegant presentation, security safeguards, and network management.

Those executives must remember, however, that you’re no video miracle worker. Developing a viable video strategy requires investment in software solutions that make mobile video creation, management, and distribution viable. It takes time to develop an effective strategy for mobile video implementation.

And if you happen to be one of those thinking about your mobile options when considering investments in new streaming technologies, you’re not alone. Forty-four percent of executives in the survey said that the ability to distribute video to mobile devices is a capability that is either a “must have” or plays a “very important” role in the streaming technology purchase decision. The proportion citing mobile video distribution as a priority is even higher among those with large budgets for streaming implementations.

In short, mobile video is growing in importance. The chances are good that you still have more technology investments to make in this area, even if you’ve done a stellar job in upgrading your streaming video workflow.

Certainly, don’t let yourself feel guilty when you go ahead and put some mobile video toys on your wish list. Even if you’re one of the few not interested in mobile video distribution today, chances are that you will be down the line.

Steve Vonder Haar is a senior analyst with Wainhouse Research. Reach him at svonder@wainhouse.com.