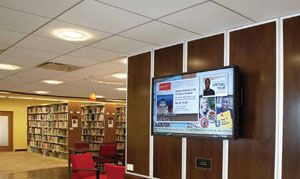 Digital Signage Advances in Mobile, 3D, and HD in Schools

In an effort to address the ways in which today’s youth connect with one another, K-12 institutions and universities alike are bringing their communications into the digital realm. As a result, standard digital signage networks are expanding to accommodate increasingly sophisticated intranet, internet, and video technologies, as well as mobile phone communications such as text messaging.

“We’re seeing a real uptake in the convergence of digital signage and mobile phones now that the mobile technology is ubiquitous and capable of handling high-definition digital content,” said John Novak, director of digital signage at Gefen, which manufactures the HD Digital Signage Player. “In the campus environment, class schedules, game clips, and more can be delivered to anyone, anytime, using a readily available mobile network that doesn’t cost the campus any additional investment.”

Black Box Network Systems recently released a study entitled Communication Effectiveness in Higher Education, which found that students prefer to receive information through digital media such as email, websites, text messages, and digital signage. Steve Acquista, Black Box’s director of digital signage, noted that the integration of these technologies can be leveraged to not only distribute daily information, but also as a means of communicating emergency alerts. “A lot of this was spearheaded and instituted because of the recent incidents that have occurred, such as the shooting at Virginia Tech,” he illustrated. “The big issue there was: Were the students notified at the time the event was occurring?” Most students, he added, have mobile devices, and they are connected to the internet, or the college’s private intranet. “Perhaps they could have been alerted if a system had been in place to get that message out.”

Novak pointed out that systems integrators are well positioned to offer technologies related to high-definition video, and perhaps even 3D. “This is going to be more important for those using television feeds in their content,” he noted. There is also sales potential in the area of audio/video cabling for longdistance transmissions either via fiber optic cable or Cat-5. “These kinds of strategic considerations should definitely be packaged in advance to create a simple, effective installation.”

Acquista explained that Black Box offers its own digital signage certification program to educate integrators about the technology, with the goal of making end-user consultations and training easier. “A lot of clients don’t necessarily know what questions to ask—a lot of it is an exploratory process where they are trying to understand and learn about what technologies are available,” he said.

Several years ago, clients were less familiar with digital signage technology, which led to a number of unwise purchasing decisions. “They jumped in and opted for a system, and then quickly they realized that there were issues,” Acquista said. “It didn’t scale as their requirements grew, it didn’t have the security functionality that they were looking for, or it was taxing the network and they couldn’t use it to its fullest extent.” Facilities in this situation are now being forced to reassess their existing systems, which may involve challenges related to legacy technology and the need to incorporate multiple contributors while maintaining network security.

Still, the argument for a campuswide digital signage network with the ability to transmit information not only to on-campus displays but also students’ mobile devices is, Novak said, a strong one. “Up-to-date weather information— which can be critical in certain parts of the country—coverage of important world or nationwide events, and emergency broadcasts are all going to be much more efficient and capable with a campus-wide digital signage network in place.”

Located in the heart of Orange County, UC Irvine (UCI) has increased construction and remodeling activities as part of its Strategy for Academic Development at UCI through 2015. With the remodeling projects, UCI’s School of Business replaced outmoded communications systems with BrightSign high-definition digital displays to provide modern, engaging signage solutions for four different communications applications.

Six networked BrightSign digital players have been installed on the campus. The turnkey solid-state media controllers include five BrightSign HD210s with high-definition looping playlist support and a BrightSign HD1010 Interactive player. In addition to delivering school news combined with RSS feeds, the HD210s deliver inter-school news and inspiring alumni success stories while the interactive HD1010 drives a touchscreen directory of more than 200 faculty and staff offices.

The first area to be upgraded was the lobby outside a classroom sponsored by Experian in the Business School’s main SB Building, where a BrightSign HD210 player displays a series of images of Experian alumni and their biographies. The biography series concludes with an appreciation screen thanking Experian for its sponsorship before automatically looping back to the first screen in the series.

One HD210 has been installed in the Business School’s Multipurpose Academic and Administrative Building (MPAA Building) to display inter-school news. Across the street, in the SB Building, three more network-enabled HD210 digital sign controllers display business school news as well as RSS feeds from Reuters and The Wall Street Journal, which are provided over the network through a subscription with SignChannel. Prior to the upgrade to BrightSign units, the signage consisted of PCs mounted in the ceilings connected by long wires to older LCD displays running PowerPoint presentations.

The last project was the touchscreen building directory in the newly remodeled main SB lobby, which uses a BrightSign HD1010 that supports both basic looping and interactive presentations. “If someone touches anywhere on that screen, the directory immediately appears with an alphabetical reference of the staff and faculty names and their room numbers,” said Toshi Nakamura, system administrator for UC Irvine. “It makes finding the person you need really fast and easy, even for non-technical people.”

Wilfrid Laurier in Waterloo, ON, Canada, is considered a mid-sized university, having roughly 12,000 students, yet it retains the atmosphere of a smaller institution. Known for its small class sizes and strong sense of community, Laurier sought new ways to engage and inform students across campus. With many clubs, events, sports teams, and academic resources available, the university wanted to ensure that they each received the exposure they needed to generate interest and increase participation.

When it came to addressing its on-campus communication needs, Laurier considered digital signage not only as a viable solution, but an innovative initiative as well. By placing screens at high traffic locations, the university could make information easily accessible and present it in a way that was both concise and visually appealing.

Laurier selected Omnivex Display software for the deployment. Omnivex software has a drag and drop, WYSIWYG, user interface, making it intuitive and easy to use. It also functions in real time, allowing the university to make changes to content and deploy dynamic messaging in an instant. In addition, it has the ability to automate many of the processes associated with maintaining a large-scale digital signage deployment.

The Laurier Bookstore is one space that utilizes Omnivex software to manage digital signage within its facility, but it has a separate representative responsible for managing the system. “The Omnivex system is simple to use and something I can manage myself on a day-to-day basis,” explained Kerry Martin, computer sales and technical support for Laurier. While an on-campus graphics designer is occasionally available to develop more complex videos and multimedia digital signage content, Martin is the individual responsible for formatting and scheduling all of the bookstore content. The main purpose of the signage is for in-store advertising about products and services, but it is also used to promote university events, activities, athletics, and student resources.

The digital signage installation at Laurier provides a unique and engaging medium that highlights campus news and events. The information that is important to students is now available to them where they need it and presented in a visually appealing way. Laurier has seen an improvement in its ability to reach students not only in the classroom but across the campus as well.