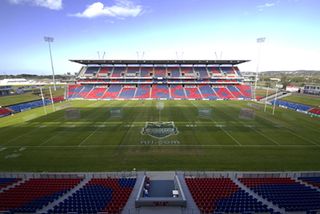 Both loudspeaker models feature rotatable horns that allowed them to be installed horizontally. Careful selection of the horn coverage pattern and orientation allows the grandstand upper seating to be serviced by a single enclosure while maintaining SPL variation of within the target +/- 3dB. Servicing the grandstand upper seating with a single enclosure has the added advantage of virtually eliminating interference effects such as comb filtering which occurs when arraying loudspeakers to cover a common zone.

The JBL AM4315 is operated as a passive 3-way and is driven from a dedicated channel of Crown CTS2000 amplification which also provides over 6 dB of headroom. The multi-band Progressive Transition mid-high frequency waveguide provides increased sensitivity in the critical midrange vocal region between 500 Hz and 2.8 kHz. The JBL AM4315 also has extended bandwidth and a well-controlled coverage pattern.