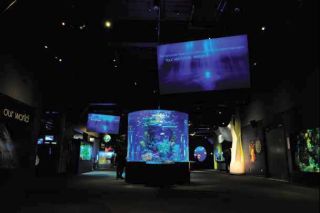 VANCOUVER, BRITISH COLUMBIA, CANADA—Since its inception at Vancouver’s Stanley Park in 1956, the Vancouver Aquarium has been internationally recognized for excellence in the display and interpretation of animals in its care. It was the first facility to incorporate professional naturalists into its galleries to explain animal behavior and natural history, and it has continued to find innovative ways to fulfill its promise to amaze and inspire its visitors.

That mission has become much more of a challenging in the digital age. “We’re in an increasingly connected world, and in the past few years we’ve built our galleries on the concept of being actively connected,” said Jeff Heywood, acting director of content at the Vancouver Aquarium. “It’s a modern approach taken by our president. We don’t want to build a gallery, leave it up for five or 10 years, then take it down and change it. We want our galleries to be changing constantly, so when visitors return it’s always a new experience. That’s what keeps people coming back—and bringing their friends with them.”

To fulfill on that philosophy, personnel at the aquarium are continuously encouraged to push past the current boundaries and expectations of a facility of its type. That is the approach Heywood and his team took when incorporating digital displays and digital communications solutions into the galleries.

“We had a lot of ideas as to what we wanted to do, but we didn’t have a great way of doing them,” Heywood said. “We needed to find a digital communication platform that offered a great deal of flexibility, while not requiring the operator to be a technology expert. It had to allow us to incorporate text, video, wayfinding, interactivity, and things we hadn’t even thought of yet, so that even the most jaded, tech-savvy visitors in our galleries can get a jawdropping experience and say, ‘Wow!’”

The answer came when the Vancouver Aquarium engaged Four Winds Interactive (FWi) to develop a custom digital communications solution. Heywood chose FWi because of the breadth of capabilities of its software, the flexibility it offered and its ease of use.

The Vancouver Aquarium currently manages content on 25 screens throughout the more than 100,000-square-foot facility.

“We needed a solution that would allow us to be creative, play with some ideas, see which ones worked and which ones didn’t, and then build on our successes,” Heywood said. “FWi made it easy to do that. Rather than having multiple screens delivering the same type of information, we’re able to do innovative and creative things, either within a gallery or sometimes even on the same screen. It really enhances the visitor experience, and despite the fact that it is technology-based, it really helps connect people with the natural world.”

The Arctic Gallery is a good case in point, according to Heywood. It features several screens that present a lot of different content, such as Arctic issues, climate issues, territorial issues, and, of course, littleknown information about sea ice and Arctic animals. Additionally the gallery has a large 46-inch touch screen that provides a wide variety of helpful information to visitors.

“That screen takes advantage of the whole button structure that’s part of the FWi back end,” said Heywood. “It has an interactive map that’s tied to our central scheduling database. As the schedule updates, visitors can see that there is a show coming up soon in the Amazon Gallery. If they push the ‘Map It’ button, the screen will show them the fastest route to get there, which is important since our building has a lot of twists and turns. It also runs video that highlights future promotions or conservation programs, such as Ocean Wise, The Great Canadian Shoreline Cleanup, or other seasonal events. We use that one display screen to do a lot.”

Move 30 feet away from the main screen and there are a number of touch panels that use FWi’s technology to host flash video. Some are simple flash interactive mechanisms, where you push a button to start the video, while others are heavily scripted (such as an interactive component that highlights beluga whale vocalizations). Despite having widely different applications, they all run off the same FWi software.

One of the most important benefits the Vancouver Aquarium realized was the ease of using FWi. The organization is currently using FWi to manage 25 screens throughout the more than 100,000-square-foot facility. The remaining screens will be converted to FWi in the near future, bringing the total to more than 50 screens that will be scheduled by one person and maintained by one other. Given that the Aquarium is a non-profit organization with limited funding, managing the process with so few resources is critical to its success.