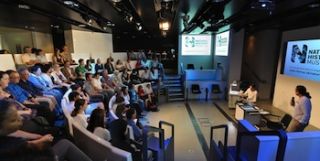 The new Darwin Centre at the Natural History Museum in London is a state-of-the-art science and collections facility, an eight-story-high cocoon in which visitors can learn about the museum’s research and watch its scientists at work. The center’s Attenborough Studio is a high-tech audio-visual venue that provides 64 seats for a variety of events, shows, and films about all aspects of life on Earth and scientific discovery. In this studio, visitors have the opportunity to interact with scientists working in the Darwin Centre laboratories and in the field.