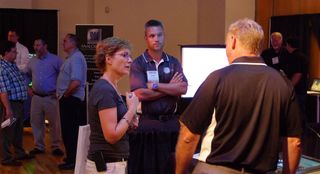 The event– that took place at the Metropolitan Pavilion with Worldstage (formerly called Scharff Weisberg) as co-host again this year– started off with a bang as the session “Professional Live Event Safety Planning– Is Your Stage Storm-Ready?” dove right into important safety issues. Scott Carroll of Take1 Insurance introduced Weather Decision Technologies (WDT) Senior Vice President David VandenHeuvel who explained the new generation of advanced weather detection and monitoring systems that are available to help make all live events safer events. VandenHeuvel also discussed how to build a Severe Weather Action Plan, and know the difference between “Now-casting” and “Forecasting” the Weather. The presentation came on the heels of the recent release of the Event Safety Guide, from the ESA (Event Safety Alliance), and the series of Webinars on the same topic produced by NewBay Media and Take1 Insurance earlier this year (you can view the archived Webinars here).

Daniel Brodie focused on case studies of some of his Broadway jobs as a top projection designer, including Joseph and Amazing Technicolor Dream Coat, the Wizard of Oz, the Right of Spring ballet, and a Tanya West concert tour. Brodie uses a mix of LED wall and high lumen video projection on most designs, and has to mix display resolutions seamlessly.

Kevin Zevchick of AV Stumpfl showed several examples of 3D projection mapping, including the booths of major Automobile brands at international auto shows, using
AV Stumpfl’s Wings media server. Zevchick, who was actually showing the Wings media server at AV Stumfl’s booth at the Roadshow, also explained autocalibration of the mapping software using a camera to plot the surface of a building for mapping.

The day wrapped with a session on “Next Generation Video Projection: 4K, HFR, Super High Lumen, Laser Light Engines, and More”, with Bill Beck from Barco, Jeff Schneider from Digital Projection, and Mike Garrido from Christie exploring the cutting edge of large venue projection. It could have been a recap of the “laser projector wars” at InfoComm but this panel was focused on large venue, live event projection, not cinema. That being said, it would have been remiss of me as moderator to not have the presenters explain and outline the genetic heritage– spawned in the cinema market– of the high lumen laser projectors we’re now seeing. Bill Beck, one of the world’s top experts on laser-light source video projection and recently having joined Barco– opened the panel by outlining the advantages of laser projectors for any large venue: brightness 2-3 times that of Xenon lamp projectors; increase of uniformity, CR, gamut and color saturation; longer lifetime with more than 30,000 hours at full brightness; higher efficiency as the laser source cuts power consumption by 30-50% vs. Xenon; and the option of placing the light source remote from the projector head. And Beck pointed out that the big gun laser projectors (both Barco and Christie have units with 60K lumens) will drive innovations across the board for large venue projection. For example, improvements in HDR (High Dynamic Range), higher res (8K), and HFR (High Frame Rate).

The day wrapped with a session on “Next Generation Video Projection: 4K, HFR, Super High Lumen, Laser Light Engines, and More”, with (left to right) Bill Beck from Barco, Jeff Schneider from Digital Projection, and Mike Garrido from Christie exploring the cutting edge of large venue projection.Christie of course is in the race with Barco to market next gen, super high lumen DLP Cinema projector, but Mike Garrido from Christie focused, in the panel, on case studies showing some of that company’s participation in a variety of prestigious jobs that used high lumen projection mapping– similar to the case studies presented in the morning’s Media Server Panel. Garrido showed examples from Christie’s recently published book “The Book of Transformations” (you can download at www.christiedigital.com/projection-mapping).

Rounding out the session nicely, Jeff Schneider of Digital Projection also presented some interesting case studies including the Christmas show at Radio City Music Hall in New York City that included video projection onto the ceiling of the venue. And in a good contrast to Barco and Christie’s laser projector offerings, Schneider explained Digital Projection’s different approach to the market– offering laser projectors that are more targeted to live events. Those projectors are DP’s new Insight Laser 4K, a laser phosphor projector with 12,000 lumens, 4096x2160 resolution and a 20,000 hour replaceable laser light source; and the HIGHlite Laser, the 1080P version with 10,000 lumens. (Interestingly, the it’s the larger size of the 4K DLP chip not any light source difference that gives the boost in lumens on the Insight model.)