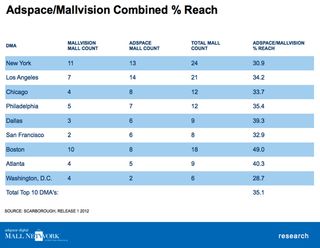 As part of the deal, Adspace will now also represent 17 other malls including GSM Worldwide Media’s large format digital network in 11 Mills Properties, for a total of 64 new malls added to the network.

The deal increases Adspace’s mall count by nearly 50 percent, from 141 to 205, enabling the network to reach 48 million individual shoppers each month through its 2,864 digital displays.

Adspace Networks will raise gross impressions from 415 million to 641 million per month, while adding Phoenix to its top 12 market list and two new malls in the influential Miami market.