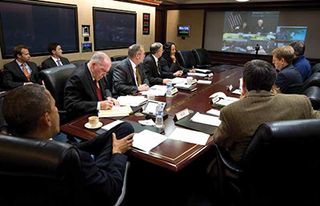 That’s right: When video teleconferences (VTCs) are held between the President and his colleagues in the Situation Room, and senior government/military leaders in other locations, it is Barrack Obama who controls the AMX Modero Touch Panel. He decides whose microphones will activate and which sources will be called up on the twin HD monitors at the other end of the boardroom table. There are other monitors in the Situation Room, but the two at the end are the ones that matter. Granted, the remotely controlled cameras are likely being panned by support techs in the control room next door, but it is ultimately the President who gets to push the button— even in AV.

“The White House Situation Room uses AMX technology to allow the many different users to control all systems in the room, including mics, cameras, monitors and the VTC suite,” said Troy Trujillo, AMX’s director of Air Force programs. “We obviously can’t reveal the specific details of what’s installed for security reasons, but we can confirm that this is a showcase for our technology.” Attentive AV watchers can spot what’s in the Situation room if they watch this video http://tinyurl.com/28767qx — a White House tour of the Situation Room.

The Situation Room may be the highest profile VTC installation in government, but it is by no means the only one. “VTC and AV in general are commonplace at all levels of government these days,” explained Russ Colbert, Polycom’s U.S. Federal Government market director. “The reason is simple. The emergence of IT as a backbone communications technology after the turn of the century, coupled with advances in digital television equipment, has made VTC a staple for agencies and departments at all levels, particularly as a cost-effective replacement for travel and in-person meetings.”

The Move Toward Convergence

In the early days of video teleconferencing, integrating AV and computers was the furthest thing from everyone’s minds. “The military made the first push into VTC in the 1990s,” recalled Colbert. “Applications were still primitive, equipment was expensive, and the need to use dedicated telephone lines made VTC cost-prohibitive for all but DoD and budget-strong agencies.”

Inside the Minneapolis EOT It was only in 2003 that VTC became a real option, as it became more affordable while quality improved. Governments began to embrace IP technology with the help of dedicated IT departments. “This is when the IT departments began to get seriously involved,” Colbert said. “But still, they tended to see AV as a ‘black box’—something that was connected to the network, but whose inner workings they really didn’t understand.”

As IP network operations/bandwidth increased and VTC technology carriage costs came down, the convergence of AV and IT began in earnest, with engineers on both sides learning the other side’s technical requirements and parameters. Today, the marriage between VTC equipment and the networks that carry and distribute it has become so close that “there really is no such thing as AV being considered a separate entity in government,” declared David Danto, director of emerging technology at the IMCCA, a nonprofit VTC industry group, and principal consultant for Dimension Data, a global ICT services company. “These days, AV is a central function for all IT departments, and something they are expected to provision and support just as they provision and support LANs and VoIP.”

“Nowadays, it is the CIO who is signing off on AV purchases and policies,” said Colbert. “Thus, the CIO is mandating integrated, standards-based solutions that offer increased security with room, group, desktop and mobile devices. No longer are there separate silos for AV and IT. The two have merged organically, with IT being in charge.”

Vice President Joe Biden and President Obama, along with members of the national security team, receive an update on the mission against Osama bin Laden in the White House Situation Room. Photo by Pete Souza. This doesn’t mean, however, that AV know-how isn’t important in governmental circles. The fact is that it is more in demand than ever before, now that AV has grown from a niche function to an essential element of the organization. “This is why there are real opportunities out there for government AV people who understand IT,” said Matt Jackson, president of Pershing Technologies, a provider of integrated AV/IT design services and support based in Columbia, MD. “AV has become central to the conducting of government business, especially at a time of fiscal restraint where VTC is so much more affordable than face-to-face meetings.”

The Implications of Convergence

AV/IT convergence is good news for AV, because of the extra opportunities that VTC offers to AV professionals and vendors. At the same time, these opportunities come with two IT-related needs, which must be fulfilled to win and keep government business.

Simply put, “the needs for AV/IT within the government sector begins and ends with security,” said Michael DiBella, manager of Crestron Marketing Solutions. “Since the government is often looking at content that is classified, it is imperative to keep the data secure. But we have seen another trend that piggybacks off security, and that is control. Being able to integrate AV solutions onto the network and utilizing management software to monitor the systems has been a very hot topic.”

Crestron’s Fusion management platform enables organizations to monitor and manage AV equipment, BMS, room scheduling, lighting, shades, and more. Meanwhile, the convergence of AV and IT is turning AV devices into peripherals attached to a LAN or WAN, just like any PC or VOIP telephone. “AV/IT convergence is the unity of audio, video and data control,” said DiBella, with the priority being “squarely on data control.” This means standard AV system designs are being supplanted by IT considerations. For instance, “if you look at legacy system designs, they often have utilized coaxial cable,” he added. AV systems are connected “through the use of Ethernet and managed AV solutions on the network. At Crestron, we are very conscious of creating solutions that integrate seamlessly onto the network, so that there is a single platform for IT managers to monitor, manage and control.”

An emerging problem of AV/IT convergence is interoperability: VTC equipment from one vendor may integrate successfully with equipment from a second vendor, but putting together systems from multiple vendor sources can run into problems. “Many firms still have their own proprietary standards and their own ways of doing things,” explained IMCCA’s David Danto. “This isn’t a problem if you are sourcing all your systems from one primary vendor, but it makes it much more difficult to reduce costs by mixing and matching multi-vendor AV products.”

Without interoperability, AV/IT customers can find themselves having to commit to one vendor’s VTC technology, regardless of price. Should VTC become seen as an essential government service, this could change: The public safety radios used by police, fire, and EMS agencies suffered from proprietary incompatibilities until the federal government mandated interoperable standards (Project 25) in 1989. Incompatibility between different vendors’ public safety radios was still an issue on September 11, 2001, which resulted in communications gaps between the NYPD and FDNY at Ground Zero.

Inside the American Red Cross in San Diego — When disaster strikes, time is of the essence for first responders; decisions need to be made, and a plan needs to be implemented immediately. The AV systems at the new San Diego Chapter Disaster Operations Center (CDOC) include Crestron DigitalMedia and NEC displays. The organization’s officials say that the new technology helps improve response time and plan more effectively.Forecast: Ubiquity?

Technological advances and the benefits of the Internet Protocol have helped merge AV and IT technologies. Combined with tight budgets, post- 9/11 security concerns, and the need for real-time communications, VTC has become emblematic of modern government communications.

Added to that, “General consumers have seen an explosion of VTC technologies in the last few years,” Danto explained. Newcomers to the workforce now expect to use VTC and services such as Microsoft’s Skype and Apple’s FaceTime. “Both government and private sector IT organizations will have to significantly up their game in AV/IT in order to meet the growing demand.”

“The federal government is becoming more nimble, more productive, and more responsive to citizens’ needs because it has been an early and avid adopter of video conferencing,” said Polycom’s Colbert. “We believe that video will become ubiquitous across the U.S. government before the end of this decade. There are more options than ever available to provide secure video collaboration, especially over mobile devices and the cloud via a web browser. And as costs are now lower, workflow and productivity are more and more combined with video applications.”