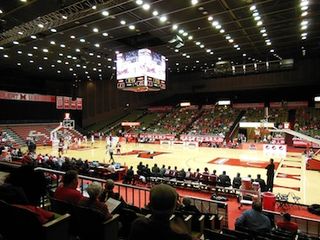 The new L-Acoustics KARA system (above the 1995 banner at left) in use during a Miami RedHawks versus UMass Minutemen basketball game. (photo credit: Andy Wittry)

With the facility’s aging distributed PA system struggling to even accommodate announcements at sporting events, the school hired Cincinnati-based L-Acoustics certified provider Loud & Clear, Inc. to supply a sound reinforcement system each time it hosted a concert. Now, Loud & Clear has turned a rental client into a fixed install client with the recent installation of an L-Acoustics KARA system.

Used for concerts and games alike, the new sound system is comprised of left and right 12-enclosure KARA arrays flown on the north end of the court. Ground-stacked below each array is a stack of four SB28 subs arranged in a cardioid configuration. Six LA8 amplified controllers housed in custom racks power and process the entire system.

“The KARA system in Millett Hall is being used for everything from sporting events and concerts to lectures and graduation ceremonies,” said Eric Cimini, installation manager at Loud & Clear. “One of the biggest things the client requested going into this project was that the coverage be extremely consistent throughout the entire venue. They wanted everyone to hear exactly the same thing — from the cheerleaders right below the PA to the athletes on the court to the final row of seats at the other end of the arena. Looking at these little 12-box arrays, one might not expect them to cover the space as well as they do, but KARA totally delivers.”

“I’m really impressed with its coverage and range; the low end sounds so much better and really suits the University crowds,” he added. “Plus, the L-Acoustics name is one that appears on every touring rider. In the past, we would typically contract out 10 to 15 events a year, whereas we’ll be able to do all of those in-house now, which is great.”