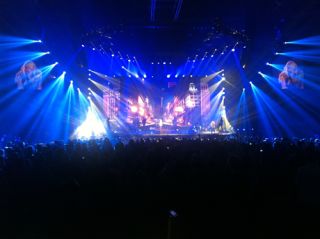 Lighting designer Peter Morse of Peter Morse Productions in South Lake Tahoe, California, based his lighting scheme around three large, trapezoid-shaped, moving LED panels, which posed dynamic weight, power, and sight-line challenges. A tilting projection floor added to the task, “necessitating a ‘surgical’ application to lighting design and programming to avoid washing out all the projected images,” Morse said. He decided to hang the trussing in a way to complement and amplify the angles created by the trapezoid-shaped moving LED walls.

Lighting programmer Brian Jenkins said, “we were crunched on programming time for starters and then there were complications with the overall size of the rig when we hit rehearsals. Thankfully, within a five-day span of programming, we didn’t have to worry about the Sharpy fixtures.”

Morse opted to use the Sharpys for “visual amplification of various musical punctuation in an attempt to draw the eyes of the audience to the artist or other areas of importance” from which the extensive LED video imagery may have distracted them. “The Sharpy fixtures were positioned to accentuate the angular look of the scenery and LED panels,” he said.

The Sharpys are performing “flawlessly,” according to Morse, who calls them “fast, bright and competitive against the otherwise overwhelming output of the LED walls. It’s a large and physically complex show with a look you won’t see anywhere else.”