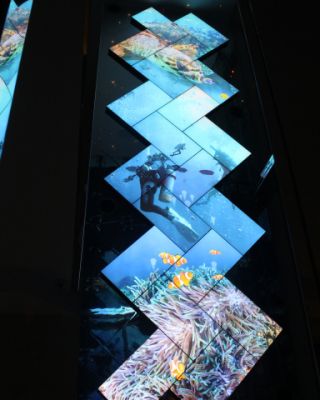 “With a high-profile installation like this, it’s important that the deployment be artistic with synchronization and 24/7 reliability – that’s why we chose BrightSign and Planar,” said Cesar Cifuentes, founder and president of CMA. “The beautiful Planar Mosaic displays work with BrightSign’s players to create a finished product that complements the look of the hotel.”

Adding to the allure, the hotel’s glass walls make the video wall visible from the street as well as the lobby. This impressive video wall brings landmark status to the hotel, helping it stand out among its peers in this stylish stretch of Florida coastline.

The Planar Mosaic architectural video wall solution allows the ultra-thin LCD display tiles to be mounted in any position relative to one another. This makes possible the towering video wall in which the twenty 55” displays are placed at a 90-degree angle to one another, creating a herringbone pattern. The displays’ unencumbered positioning flexibility, off-board power supplies and imaging software enabled CMA to design and install the video wall in such a way that simply would not have been possible using displays from any other manufacturer.

“Our vision for architectural video walls is well demonstrated in this hospitality installation,” said Jennifer Davis, vice president of marketing at Planar Systems. “By consulting with the client in the first stages of the design process, CMA’s installation has become a focal point visible from the street, and is destined to be an iconic fixture in the model Miami architectural landscape.”