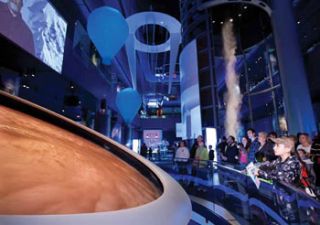 Chicago’s Museum Of Science And Industry Wows With Exhibit

At the exhibit’s Avalanche Disk, Renkus-Heinz IC8-R speakers are hidden behind a perforated screen, with the main audio augmented by by a JBL AC26 and a Bag End D10E-I subwoofer mounted below a grille in the floor at ten listening stations.

CHICAGO, IL—Science Storms, a permanent exhibit at Chicago’s Museum of Science and Industry, offers an enveloping display of the natural world’s most dramatic and powerful events. In the 26,000 square-foot exhibit, visitors can experience interactive mechanical exhibits including a 40-foot tornado and highvoltage lightning.

For Mad Systems, providing the AV design and control/ diagnostics equipment was only part the effort. “We were involved in the original concept design work,” said Mad Systems president Maris Ensing. “We also did the design for the safety interface systems. So we did a lot more than basic AV on this job.”

As audio features prominently, the acoustics of the original space had to be addressed, Ensing recalled. “Speech intelligibility in this exhibit is paramount, and with the huge numbers of exhibits in the space, it is very hard to control sound spill considering that audio needs to be delivered so that it ‘works’ for the visitors, especially as a lot of spoken word is used. When we gave Jack Pascarosa, the designer, the design parameters that needed to be met from an acoustic viewpoint, he came up with a gorgeous solution that employs perforated metal with a built-in blue light at the bottom as well as acoustic absorption to blend in with the exhibit space, proving that acoustic paneling does not need to be an eyesore.”

A high-quality audio experience, and separation between exhibits, was essential. Mad Systems selected and installed a variety of loudspeakers to address these needs. For major theatrical-type experiences, a combination of Renkus-Heinz IC8-R steerable arrays, Bag End D10E-I subwoofers, and JBL AC26 speakers was employed. “These ICR-8s, where we used them, are mostly hidden behind the perforated screen,” Ensing explained. “A good example is the Avalanche Disk, where the main speakers provide a background so that visitors who stand right in front of the disk can hear the audio, but the primary ‘listening station’ is somewhat further out.

“The main audio,” he continued, “is provided by a JBL AC26 and a Bag End D10E-I subwoofer mounted below a grille in the floor at each listening station. There are 10 or 12 D10E-Is in there.” Huge rear-projection glass “firescreens” employed in two exhibits are also coupled with ceiling-mounted Bag End D10E-I subs, as well as Boston Acoustics SoundWare speakers.

Close to 100 SolidDrive SD1 speakers were installed. The Atoms exhibit, for example, features “a three-projector-wide, edge-blended display where there are additional exhibits in the middle between the screen and the seats,” Ensing said. “The main speakers, mounted behind the screen, provide the primary wave, and a delayed signal is fed into the SolidDrive SD1 speakers built into the seat backs to activate them, where the bulk of the audio volume is provided. To visitors it sounds as if the audio comes from the main screen due to the fact that the primary wave from these speakers arrives first, even though the audio is in fact mainly supplied from the seat backs.”