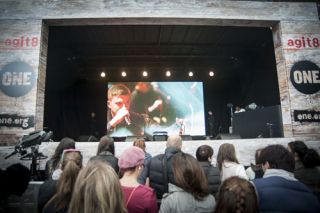 The 3-day event, which featured music stars and well known actors, aimed to inspire a new generation of activists to get involved in the fight to end extreme poverty.

XL Video was approached by Mark Ward and Mark Pinder, who had worked with The One Campaign previously, with a view to supplying projection on to the front of the Tate Modern.

Following the test, it was agreed that the projection on to both the tower and the front wall of the Tate was sufficiently bright that the 40k Lumen projectors could throw directly on to the building’s brick surface.

The content for the three nights of projection was conceived by production company The Found Collective, who worked with acclaimed director Richard Curtis to create an original piece for ‘agit8’.

To ensure visibility on the front of the building, even at sunset on a summer evening, XL Video specified eight of their Barco HDQ-2K40 projectors, ably managed by projectionists Mike Dorrie and Dave Rogers. Content was fed from a pair of Catalyst media servers programmed and operated by Alex Passmore.

The building was divided into three sections – two front walls and the mid tower section - each fed by a pair of the Barco units. The final pair of projectors was used to project The One Campaign’s logo on to the top of the tower as a beacon across the London skyline.

Live music performances took place during the day and into the evening on a riverside stage adjacent to the Tate. Here, XL Video supplied an LED screen made up of Barco NX6 - tech’d by Gavin Precious - together with a further Catalyst media server to handle the content for the LED.