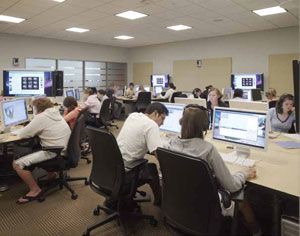 At Santa Clara University, The Sextant Group completed a media lab that has become a successful multidisciplinary classroom because of its collaborative and display capabilities.

Just months after The Sextant Group’s founding in 1995, president and CEO Mark Valenti had an “a-ha moment” after speaking with a marketing consultant. Encouraged to establish a beachhead in one specific market, Valenti and his colleagues chose to focus on higher education, a direction that came naturally to Valenti, a former adjunct professor of audio production. Fortuitously, the decision came just as the higher education technology wave was gaining momentum.

Over the years, The Sextant Group has been an advocate of technology’s ability to advance the learning process. “Since 1996, we’ve been touting the way that technology enables small groups of people to work together differently in collaborative teams, whether it’s a group of people sharing a flat-panel display or a group collaborating in a virtual workspace over the internet,” said Valenti. “That trend has really emerged as a tidal force that is starting to manifest itself in what our clients are asking for in their learning space design. We’re seeing the active learning model start to take hold, and a deep and sincere interest in moving away from having the instructor lecture at the front of the room with a PowerPoint presentation.”

While the firm still does traditional classrooms and lecture halls, it is also involved in building more innovative teaching environments. At Santa Clara University, The Sextant Group completed a library that now serves as a bellwether project for other campuses. It includes a media lab that was primarily intended for students who were learning to work with audio and video in a multimedia environment. But the lab has since experienced broader success as a multidisciplinary classroom because of its collaborative and display capabilities. “The CIO told me, ‘Mark, this is awesome. You cannot teach the way you used to teach in here because there is no front of the room.’“

To help clients transition from a lecture-based teaching model to one focused on project work in small teams, The Sextant Group hired a principal consultant who is a professional educator and a former teacher of the year in her home state. She meets periodically with clients and their select faculty groups to offer training vignettes on each of the key technologies in the years before a new building opens. “We’re not teaching them how to run a touchscreen or turn a projector on,” said Valenti. “We’re working with them to develop pedagogical components that let them adapt and redesign their courses to take advantage of the technology that will be in the new building.”

And while The Sextant Group prides itself in going deeper than many AV consultants into the teaching and learning process, the firm does not specialize solely in classroom work. “The thing we like most about higher education is that the typical university has buildings of every single kind—and we do them all,” said Valenti. The Sextant Group’s projects have included everything from football stadiums and sports arenas to residence halls, research labs, business buildings, performing arts buildings, and student unions. “Some of our guys wouldn’t work here if they just did classrooms day in and day out,” said Valenti, “but higher education gives us the opportunity to stretch in a lot of different directions.”

Working in higher education also provides some additional benefits. “Everywhere I go is a campus town with good food, good bars, and lots of culture,” Valenti said. “And I work with people who are all very smart by default. It’s a very collaborative and sharing marketplace—and I find that collegial environment to be a very nice place to be.”

Chris Gelbach (chrisgelbach.com) is a freelance writer based in Chicago, IL.