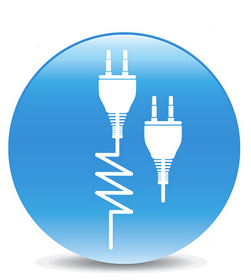 The advent of powered loudspeakers such as the Renkus-Heinz Iconyx, which is a six-inch wide column with an appealing visual profile, is an important one for several verticals including the house of worship (HOW) market, said Mark Thompson, president of Clarity AVL. “We’ve used the Juice Goose CQ-1 Qiwi to remotely sequence the R-H line arrays in two church installs to date. It’s a very simple process; with one Cat-5 cable to the location there is no need for any logic controls for the speakers, and the speakers are powered on and off with the rest of the system.”

Because the CQ-1 fits in a standard three-gang box, there is no need for a sequencer on the circuit breaker. Multiple units can be used on the same circuit, allowing the speakers to be turned on/off in sequence, rather than together, which allows you to fully use the circuit, since the “power on surge” utilizes more power than the speaker will use at any other time.

Everything is going “network,” Thompson said. “We work in a lot of schools and performing arts centers, sometimes within the same facilities. Now, with digital consoles, I can run Cat-5. Previously, if something happened to the system, the four-inch conduit between the amp room and mix position was ruined.”

Generally, the largest conduit in any project is the one between the mixing console and the system rack, which includes processors, power amplifiers, wireless mics, receivers, etc. “That conduit is typically a single four-inch on dual three-inch conduits and is placed underground prior to the floors being poured. If that conduit is damaged at any point in construction, then there is no way to get a system snake (32 to 48 channels of audio) through to the system rack,” he noted. With a networked solution, all of that audio is carried on a single Cat-5 cable, which can fit in a much smaller conduit. Typically multiple Cat-5s are run through a smaller conduit, allowing for redundant multi-channels snakes, as well as future-proofing the installation.

One challenge in working in performing arts venues is the location of an optimum mix position. “The best place to hear the sound is usually in the middle of the room where the seats are, Thompson said. “It’s not a great idea to take up prime paying seats to install technical systems. It’s also distracting to patrons to have techs talking to each other and flashing lights going on while they’re trying to watch and listen to a show. With a digital console, it’s easy to duplicate the mixer controls on an iPad or mobile PC and then walk the room to check out the way it sounds everywhere. When a tech can walk up to the musician and tweak their mix while standing next to them saves a lot of time and leaves a happy performer.”

In just the last couple of years they’ve gone from being what he called “inadvertent beta testers” to an example of how things are now done across vertical markets. Clarity recently finished a project for a high school that has a TV studio in another building. They have a digital snake and a Dante card in their console and fiber was run between the performance space to the TV studio so the school can broadcast performances to multiple places on campus.

“Via the Dante network they have all audio available on any networked PC on campus that has an installed Dante Virtual LAN card,” Thompson said. “This turns your LAN connection into a Dante port capable of bidirectional 64- x 64-channel audio. There are 48 channels of inputs on the stage, and eight channels each in two classrooms all linked to the same Dante system. They could have a band for a musical production isolated in a classroom, watching the PTZ camera feed on the TV while playing along.”

The school can have a recording classroom anywhere on campus, with each student working with the same live or recorded multitrack audio. Recording can take place with performers on stage and/or in the two music classrooms. Sound techs learning to mix can practice with recordings of actual performers in their headphones, or even in the auditorium during off hours.

The TV studio also has network control over the pan/tilt/zoom camera in the PAC, so that they can broadcast events taking place in the PAC either via the school’s own closed-circuit system or over the internet. The video switcher in the PAC also sends a direct feed to the TV studio, and the TV studio sends a live feed back to the PAC switcher. All of this, along with a two by two Dante audio interface, is over the network, via fiber.

“Technology is gaining more of a foothold in the education market,” Thompson said. “Because music and arts programs are being slashed, this technology can leverage the instruction of music and arts in schools, providing a much needed interface. The approximately $1,500 cost of the Dante card is substantially less than that of a copper audio snake of a similar channel count, particularly when you factor in a single 1.5-inch conduit versus a four-inch conduit, and a copper snake cannot be distributed all over campus. So it’s less expensive going in, and with more opportunities in the future. The Dante interface card in the mixing console, connected to the school network, allows for an explosion of both creativity and productivity and I’m sure that many additional uses will be discovered by students and teachers.”

By Karen Mitchell
 
Like celebrities they’re skinny, remote, and they may have power control issues. Active speakers with slim profiles such as the Renkus-Heinz Iconyx and similar models are nothing if not attention grabbing.

“We are down in the trenches of power management, but around us we can see a continuing migration in houses of worship and similar installations away from systems with centralized amps in racks toward distributed amplification using powered speakers, some with integrated signal processing,” said Peter Cook, vice president at Juice Goose.

The shift is not without power management challenges. In traditional system design, power-consuming devices are primarily found in one or two central rack locations, so equipment can easily be controlled with a switch or power sequencer. “But with distributed amplification, you have power cords distributed around a venue, complicating the process of turning the entire system on and off,” Cook observed.

And if powered speakers aren’t turned off, a low level of power consumption is always present, even in sleep mode. ANSI/ InfoComm 4:2012, Audiovisual Systems Energy Management standard defines and prescribes processes and requirements for ongoing power-consumption management, Cook elaborated: “When speakers are consuming power and are left in the on mode, this flies in the face of those protocols.”

One solution is turning power off at the circuit breaker panel with motorized switches. But in some installations that approach tends to be overly elaborate and expensive, as well as difficult to integrate. The Juice Goose approach is to provide power control in the wall at the AC receptacle with either the CQ-1 “Qiwi” or iP-1 “Piwi.”

The CQ-1 fits in a wall with an AC receptacle and circuitry behind it that allows the receptacle to turn on and off simply. Several of the same units, with cabling running between them, can talk to each other, allowing control of several powered speakers to be easily integrated with FOH power sequencing.

“We’ve created this CQ series to be aesthetically pleasing,” Cook explained. “It’s not a big box, it can sit behind the speaker which is plugged into it. From a remote location, you can push a button and control the FOH, racks, etc., and integrate the speakers into the whole house power control system.”

The iP-1 Piwi fits in a wall like the CQ-1 and features web-based control architecture, particularly suitable for mid- to hightech installations such as larger houses of worship, universities, and corporate venues, where end-users are comfortable with sophisticated control systems. “This type of control behind an aesthetic wall plate lends itself to use with digital signage as well as powered speakers and other distributed electronic components,” he added.

The increased popularity and visibility of powered speaker systems will bring with it an opportunity to provide another level of power management, Cook concluded. “While the future of power control in the AV industry clearly will involve greater reliance on the internet, we believe that in the foreseeable future, simple sequencer systems will continue to have a place in the market alongside more expensive web-based power management components.”

Today’s technology managers are looking for much more than just the ability to remotely control lighting and create scheduled events, said Tom Barnett, director of marketing communications at Crestron. “Ethernet connectivity enables not only remote control, but also monitoring and reporting across an entire enterprise or organization. With networked devices and a centralized enterprise management platform like Crestron Fusion, technology managers can use reporting to answer any questions the system is configured to capture data on: how much energy is being used on lighting each day? Are we reducing energy consumption for lighting on sunny days by benefitting from daylighting? Which ballasts and lamps need replaced?”