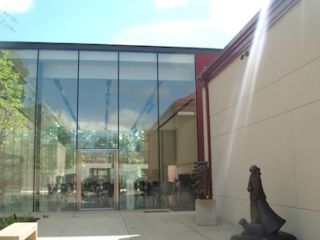 “Wherever you have large expanses of glass, you know you’re going to have to deal with the potential for excessive reverberation," Shawhan said. "Additionally, to give the room a cleaner appearance the ceiling has a series of narrow tracks that are painted black. These tracks house the lighting as well as the sprinkler heads, smoke detectors and rigging points for portable equipment—and the architects also wanted the speakers to be hidden in these tracks.”

The Putnam Pavilion is used for art exhibits, corporate and special events. In addition to background music, sound system uses include support for small musical groups and presentations, so Shawhan needed speakers that would fit in the limited space, and deliver clear, articulate sound with good coverage throughout the space while maintaining a high degree of control. He found the solution in JBL’s AC28/95 compact loudspeakers. “We used 16 of the JBL AC28/95s, which gave us significant output to cover the room. These speakers provide a higher degree of control in the mid-range frequencies than what is available from any other speaker in this size and price range, and the speaker’s 90 x 50-degree waveguide gave us the control over the high frequencies to keep them from bouncing off the glass.”

Because of the varying uses of the facility, audio processing was a major consideration as well, and Metropolitan Acoustics included a BSS Audio Soundweb London BLU-100 12 x 8 signal processor with a BSS BLU-BIB in the system design. “We expanded the capabilities of the AC28/95’s with the BLU-100’s extensive DSP capabilities, and used a little more processing power than would normally be required in less acoustically challenging spaces. For this installation we needed more than just a simple mixer. We never know where people are going to set up in the room, so we divided the system into six zones that can be operated independently. A user can turn each zone down or off as needed, and this helps with feedback control."