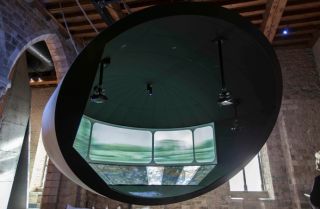 The newly opened In Flanders Fields Museum in Ypres, Belgium interprets the stories of the First World War as seen in the Flanders region using modern museum techniques and multimedia for visitors of today and tomorrow. projectiondesign F22, F32 and F35 wqxga projectors and WB processors were provided by specialist museums system integrator, Ocular BVBA for use in the Belle Epoque, First Battle, Ypres Salient and Third Battle exhibit areas with the aim of stimulating a more in-depth look at how museum visitors deal with war and peace.

In the First Battle exhibit, an F35 wqxga projector is used to project from the ceiling onto a 3D scale model map of the battlefields from the North Sea to the front line. Viewers can watch the deployment of allied troops in the city of Ypres and the first battle from an eagle’s point of view.

Ypres Saliant uses three projectiondesign F22 projectors and WB1920 processors onto a 170-degree curved screen to observe the progress of the war as if traveling in a balloon high in the sky. Footage includes a view over buildings and deployment of troops around Ypres. The content is a combination of historical footage and custom-made film.

Perhaps the most harrowing exhibit, the Third battle, uses four F22 projectors onto a curved screen and ceiling to provide symbolic visuals with narration by nurses, doctors, soldiers and priests about one of the bloodiest battles in the First World War.

“To achieve the exhibit areas, Vanden Avenne says, we had to look for a partner that could do the engineering of our projections and cooperate with us during the building of the museum. We turned to projectiondesign because of their high-performance projectors for each exhibit area and choice of lenses.”

“As the museum is open ten hours a day, we wanted to have reliability and longevity with no image degradation. projectiondesign guaranteed that their projectors would remain consistent during heavy use,” said Vanden Avenne.

Anders Løkke, Marketing Director, said, “We are impressed with the integrated approach that Ocular has taken. The exhibit areas are pushing the boundaries of how projection can be used to engage, inform and tell the story of the First World War.”