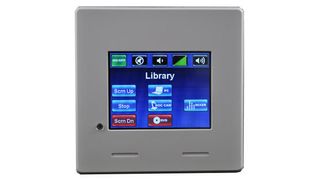 According to Tom Loveitt, design, sales, and support at Canfield Systems, who designed and installed the FSR system, the FLEX LT-150 is installed at the desk of the assistant clerk in the House of Representatives chambers and is operated by the journal clerk during legislative sessions. The project involved replacing the existing, 18-year-old Danish Interpretive System (DIS) with a current model.

“The upgraded system, while largely superior to its predecessor, lacked certain features that were essential,” Loveitt said. “The DIS system offered no serial control option and the room is well wired with Cat-6 twisted pair. With the great assistance of FSR’s tech support, the unit was configured to mimic the functions of a proprietary control surface from the original DIS conferencing system.”

As Loveitt explained, the older, analog DIS conferencing system had an optional, external control panel on which the operators had become dependent. However, that panel did not exist in the new, digital system. While the associated GUI software is powerful, Loveitt and his team had to replicate some of the older unit’s features on the FSR Flex panel.

“We chose the LT-150 because the DIS-CCU communicates by way of TCP-IP protocol only and the FLEX line offers just that in the LT-150,” Loveitt said. “Other third-party control systems could have been used, but at a far higher cost and the level of technical support and sincere care for customers found at FSR led to the choice of this product.”

Flex-LT is a self-contained control system with a variety of features. The Flex-LT mounts in a wall or sits on a desk and presents the user with an intuitive 3.5-inch color LCD touchscreen and an IP port. Through the touchscreen, the user can choose which source is being displayed and change the volume. The Flex-Able configuration utility is designed to help users get the most out of the system: The contractor is presented with an easy-to-follow, drag-and-drop programming methodology, with no need to learn another programming language.

“FSR’s FLEX systems have been extremely well received and used within a wide variety of markets, including education, corporate, government, hospitals, and more,” said Jan Sandri, FSR president. “We were especially pleased that Greg Calantropio, FSR technical sales and support, was on board for this important project, keeping our customer happy with great support. Greg, our FLEX tech specialist, was able to tailor the LT-150’s functionality and maximize FLEX’s many features and options to the Maine House of Representatives’ specific needs.”

Loveitt considers the install at the Maine House of Representatives a success. “Any institution change is difficult,” he said. “However, they are quite satisfied with the outcome and pleased with the effort shown by both Canfield Systems and FSR.”