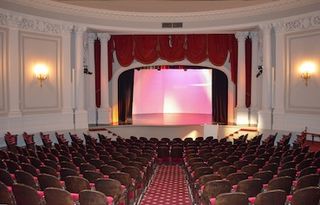 The Palace is also home to the Florence Gould Theater, an ornate 333-seat jewel box auditorium designed by museum architect George Applegarth. Opened in 1924 as the Little Theater, the venue hosts a regular calendar of concerts, lectures and theater performances.

The theater's massive columns, rounded walls, and domed ceilings create a breathtaking environment, as well as some challenging acoustics. "The room has no acoustic treatment whatsoever, and an abundance of hard surfaces," said Joe Orlando of Atwater, CA-based Commercial Media Systems. "It's highly reverberant, and spoken word intelligibility is pretty much non-existent."

Commercial Media created the system design and assisted the Museum's production department with the installation.

"The room works great if you're onstage and you have a good, theatrical speaking voice," said John Anaya, production manager for the Fine Arts Museums of San Francisco. "But for amplified sound, the room has some very problematic reflections. In fact, we found that the best seats in the house for sound were in the very back of the theater, while the front rows had terrible sound."

Over the years, a succession of audio systems has failed to make a significant impact on the problem, until CMS recommended an upgrade to four Community ENTASYS high-performance column line arrays. A pair of ENTASYS full-range columns are mounted on either side of the proscenium, powered by the museum's existing Hafler amps.

"Due to the room's architecture we had to mount the speakers much higher than what would have been the optimal height," Orlando explained. "But the ENTASYS columns enabled us to angle the arrays and focus the sound downward to the seating area, and off the walls and domed ceiling. ENTASYS is really the only system that would have worked in that space."

"Of course, we were not going to put anything in here that affected the aesthetics of the room," added Anaya. "The ENTASYS speakers blend into the space perfectly; they match the walls so well, we find we have to point out to people where the speakers are."