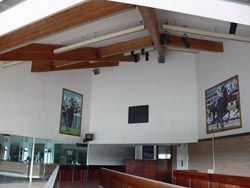 The racetrack and grandstands at the Pomona Fairplex are slated to receive 26 Community R-1 units, with eight more in auxiliary areas.
"We knew the R-Series would be a good choice in terms of their power and range, but I think the client was mainly impressed with their voicing," observed CSI engineer Terry Galati. "The sound is very consistent across the entire range, both up close and far afield, and they have a really pleasant voicing that people pick up on. Very few systems can deliver both intelligibility and musicality equally well, but the Community R-Series does it."

The racetrack and grandstands are slated to receive 26 R-1 units, with eight more in the auxiliary areas. As Shaw explains, ultimately each area's system will be designed as a separate entity, with the entire complex tied together via fiber to provide for a park-wide announcement system. The racetrack will be getting a dedicated satellite uplink as well, for worldwide broadcasting of horse racing events.