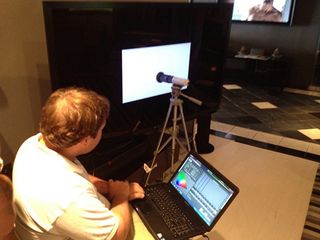 ISF– the Imaging Science Foundation– the Commercial portion of which is run by Alan and Jonathan Brawn, and now also with new addition Jeff Murray teaching courses– has been on something of a roll lately. ISF has branched out beyond just display calibration, and are now offering specific offerings for digital signage, production, and more.

A student calibrates Elite in Houston last week.According to ISF, the ISF spec is now engineered into over 12,000,000 displays per year. ISF “trains pros to deploy these utilities with HDTVs provided by Sharp, Panasonic, LG, Epson, Runco and others,” said Jeff Murray. “These displays are ISFccc engineered for calibration so your work is simplified with ISF designed CalMAN workflows. Select automated Workflows will save you time on 10 or 20 point grayscale and 18 Point 3D CMS color gamut adjustments. The degree of accuracy now available via these workflows is superb, repeatable and efficient.”

Here is a run-down of some of ISF’s offerings:

A course geared towards colorists, VFX, DITs and others involved in the video and feature film industry.

• ISF Studio - A course geared towards colorists, VFX, DITs and others involved in the video and feature film industry:

For ISF course information, and to register: