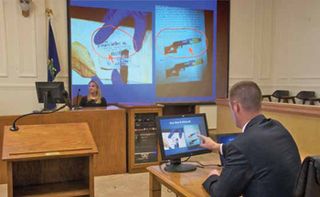 The heart of the digital courtroom system is the Pointmaker CPN-5000 annotation system by Boeckeler Instruments.

LYNDON, KS—It feels good to say you’ve just designed and installed two of America’s first all-digital courtrooms. Certainly, these laurels smell all the sweeter after dealing with some unusual challenges along the way. Imagine bringing an early-1900s courthouse up to date with the latest audio and video technology that’s needed to streamline today’s costly trials. Add to that the challenge of making a complex installation fully digital during a time when no single digital format is guaranteed to be compatible with another.

And finally, imagine receiving a requirement that the judge, witnesses, and attorneys all need to annotate a variety of digital images in order to clearly explain each exhibit in the trial, whether sourced from a laptop, document camera, or Bluray player, making computer-based annotation software solutions practically unusable.

These are all challenges that didn’t deter Larry Heilman, president and key designer of Smith Audio Visual in Topeka, KS. In late June 2011, he and his tech-based team completed the alldigital courtroom installations for the Osage and Wyandotte county courthouses in Kansas, west of Kansas City. And he lived to tell the tale.

Subtly visible in the courtroom are four 22-inch Elo Graphic touchscreens for use by the two opposing attorneys, the witness, and the judge, with a widescreen projection system for jury and courtroom viewing. As it turned out, Heilman said that training the attorneys, judge, and witnesses to use the equipment only took an hour in the first courtroom, and a little more in the second, mostly because there was a lastminute switch in judges.

Another requirement was that the judge needed to control which audio and video evidence would be shown on the fly, at which point the evidence is formally admitted to court. This solution was provided by Smith Audio Visual’s 1Touch Digital control and audio system. The system offers a proprietary sidebar function that the judge can easily select, which has the effect of setting up a private bench conference between himself, the two attorneys, and the witness. When the conference is over, the judge turns the sidebar function off, allowing all video and audio to pass through to the jury and courtroom.

ANNOTATION ACROSS THE COURT

With the wide variety of visual evidence being presented these days in court via digital media, Heilman said the heart of the digital courtroom system is the Pointmaker CPN -5000 annotation system by Boeckeler Instruments. The new CPN -5000 model is the first HDCPcompliant Pointmaker video marker with an integrated capture, print and TCP/IP networking feature. It’s also a highly flexible scaler, capable of receiving video input in composite, Y/C, VGA, DVI-I, and HDMI formats, while scaling the output in high-resolution formats up to 1280 x 1024, 1440 x 900 and 1080p.

“That’s why we got the Pointmaker,” Heilman said. “It allows us to annotate from all four of the 22-inch touchscreens. This is something that no other annotation unit will allow. The outputs and control from the CPN -5000 make distribution simple.”

Subtly visible in the courtroom are four 22-inch Elo Graphic touchscreens for use by the two opposing attorneys, the witness, and the judge, with a widescreen projection system for jury and courtroom viewing.

With the Pointmaker, each user can be assigned a unique color for easy future identification as evidence is presented. The judge can mark any of the images as evidence, then capture them for future playback. Each captured image is automatically stored with an ID number, and can be printed or stored to USB memory drives or a computer. The output from the CPN -5000 is separated into two channels: a program output for all to view, and a preview output that only the judge, witness, and attorneys can view. “The unit is a tremendous time saver for both courthouses,” Heilman said.

Heilman will tell you that your courtroom isn’t all digital until the audio is also digitized, which is where he sets his team apart. “There’s a need to hear and record every voice in the judicial process, so that everyone, from the court reporter to the jury to the hearing impaired can understand what’s going on. You get this by properly mixing and powering your audio, and digital is the way to fine-tune this.”

In addition to providing the sidebar function mentioned above via its video distribution features, Smith Audio Visual’s 1Touch Digital systems include full digital audio processing with complete control from a seveninch touch screen controller. The audio for each microphone is separately processed and properly distributed to the sound system, with full feedback control and individual audio control. The distribution system also digitally provides balanced signals to the digital audio recorder, sound reinforcement, jury audio, hearing impaired features, and more. “This is a huge improvement over existing audio systems,” Heilman said.

Smith Audio Visual digitized everything in the two courtroom systems, as well as provided every piece of equipment except the PC. Yet Heilman laments what many systems integrators have experienced in recent days: “It used to be that analog AV just hooked up and worked, even though the picture quality wasn’t the best. Now, with digital, we have great picture quality, but when you hook it up, it either works or it doesn’t with the rest of the system,” he said. “There’s no true compatibility with digital right now. The standards are not consistent.” For example, he says there are nine different formats of DVI and HDMI that require multiple handshakes.

Also, cable length is critical with digital, and digital extenders are not all compatible. “USB extenders—some work and some don’t. It’s worth the extra $10 to get the Pointmaker extenders because we used them in other installations and we already know they work. As we all know, there is no standard input/output for the cables. DVI does not include audio, HDMI has the audio and both have serious length restrictions.”

In the end, Smith Audio Visual selected HDMI with additional analog audio-follow for these installations, because DVI does not include audio. In testing different HDMI extenders, Heilman found Hall Research seemed to have the best signal quality with longest cable length. Plus the UH-2C-3S compact distribution hub saved a lot of precious cabinet space. The Hall Research SC-VHD-HDMI sender also scaled VGA and 3:4 Video to HDMI; the unit will be removed in the future when not required, thus saving the client from having to rewire in the foreseeable future.

Joelle Kearney is a freelance writer living in Southern Arizona.

Order in the Court

Spend a lot of time on the design. Working out the incompatibilities takes time.

Order early if you can. There’s a shortage of mixers and amps out there because of Japan’s earthquake and tsunami. Chip sets and certain components that no one else but Japan had manufactured in volume are scarce.

Give yourself time and room to think creatively. Smith Audio Visual had to design both courtrooms on this project so that the switchers were in the front end and distributors, amps, and extenders were in the back.