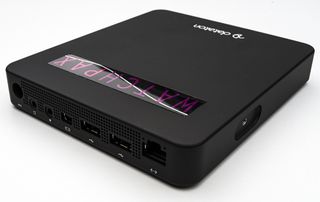 Not proprietary to WATCHPAX, the integration of WIRETAG AND PICKUP can also be incorporated in existing audiovisual systems that deploy WATCHOUT and associated computing hardware.

“Simply put, WIRETAG allows the direct integration of a WATCHOUT show with our PICKUP audio-guide system,” says Lars Sandlund, Chief Operating Officer, Dataton. “The user can point and click at the WIRETAG with a PICKUP audio guide, and jump straight into the soundtrack at the correct point in the show, regardless of how much time has elapsed.”

For added functionality with WATCHPAX, each WIRETAG plugs into the WATCHPAX via the latter’s USB connection and requires no separate power supply. The transponder can then be affixed to a display or other visible unit using the supplied self-adhesive pad. PICKUP users can be as much as 8m away from the WIRETAG and still receive the correct audio.