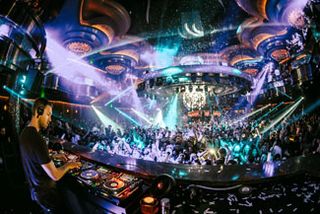 It’s all about that bass at the multistory Omnia Nightclub at Caesars Palace Las Vegas Hotel & Casino, where dozens of L-Acoustics loudspeakers drive the action on the sprawling Main Club dance floor and set the mood in the intimate Heart of Omnia VIP ultra lounge.

L-Acoustics was selected to supply the loudspeaker systems at Omnia following extensive demos for the client, including one of the club’s star in-house DJs, Afrojack, at the manufacturer’s facilities in Oxnard, Calif.; Marcoussis, on the outskirts of Paris; and in London. The audio systems design team included Audiotek’s owner and managing director, Frank Murray, sound engineer Chris Kmiec, technical director Len Bolger, and project logistics director Mags Morton, together with James Algate, Hakkasan Group’s VP of music. Kmiec, who was also on-site project technical manager, collaborated closely with Dan Orton, L-Acoustics’s application engineer for the U.K. and Ireland, during the design process.

“Having been associated with Hakkasan Group and its companies for nearly 20 years, we've been involved in a number of their landmark venues worldwide, including Godskitchen, Code, Home, and more recently, Hakkasan in Las Vegas,” said Murray. “We have always tried to outdo and outperform our previous designs with each new adventure, and Omnia has certainly been our most ambitious project to date.

“Continually striving to be at the cutting edge of the technologies within our disciplines, when it comes to audio, means embracing and specifying the most innovative products regardless of their origin, complexity or cost. For Omnia, the world’s premier dance club, that solution was L-Acoustics, and we are delighted to say that we have achieved a result far beyond our greatest expectations. The L-Acoustics kit delivers a sublime performance night after night, and the uniform reaction of clubbers, performers, and management has been overwhelmingly positive. It was a pleasure to deal with everyone at L-Acoustics; their attention to detail and drive to achieve the best possible result is truly commendable."

In the Main Club, a quad arrangement of 12 ARCS II constant curvature speakers is focused on the dance floor, which is directly below a 65-foot-tall domed ceiling and TAIT-designed, 10-ton “chandelier” of kinetic lighting and projection. Low end is handled by a dozen SB28 dual-18-inch subwoofers, most of which are clustered together for greater coupling and positioned below the stage. On stage, two stacks, each comprising three Kara(i) WST line source modules and two SB18i subs, deliver foldback to the DJs.

In the Heart of Omnia ultra lounge—one of three spaces within the venue, the third being The Terrace rooftop overlooking the Strip—the main system comprises four ARCS Focus and four ARCS Wide loudspeakers with six SB18i subs. Additional 12XTi passive coaxial speakers plus six SB15m high-power, compact single-15-inch subs handle in-fill in the lounge, which offers a hip-hop focus to the 1,000-capacity VIP crowd. Monitoring at the DJ booth includes 115XT HiQ coaxial loudspeakers and an SB18i subwoofer. The system is powered by four LA8 and five LA4 amplified controllers.

Rockwell Group, headquartered in New York City, handled architectural design for Omnia, which doubled the floor area of the PURE nightclub it replaced, enabling the venue to stake its claim as the largest ightclub in Las Vegas. The opening weekend at Omnia featured performances by DJ Irie, Martin Garrix, DJ Ruckus, Questlove, and Chuckie in addition to Calvin Harris, as well as Justin Bieber’s 21st birthday celebrations.