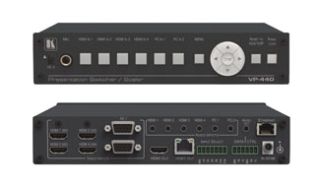 The VP-440 has unbalanced analog stereo inputs for each video input and embedded audio for its HDMI inputs. The product also includes an unbalanced analog stereo audio output along with its HDMI and HDBaseT outputs. The VP-440 comes with a microphone input and includes audio digital signal processing with features such as audio equalization, microphone mixing and talkover, and delay. The unit also includes level control for the outputs and each individual input.

The VP-440 uses PixPerfect, Kramer’s precision pixel mapping and scaling technology, and ProcAmp that lets users individually set color, sharpness, contrast, and brightness. The unit also provides constant output sync, a feature that eliminates disruption on the output during input switching when no video is detected.