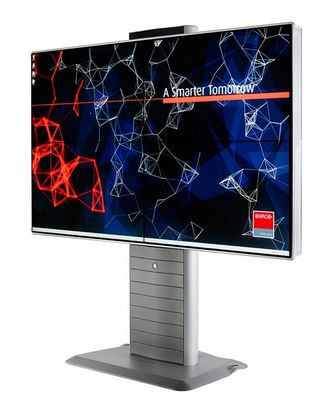 Barco OBLX-4610
It's seems there's a bumper crop of "laser" projectors making their debut. Most of these are LED/Laser hybrid light engines. The projection world in general is seeing a trend toward “Solid State”, or lamp-free projection– using LED phosphors and/or Laser light as the light source, in place of a conventional mercury lamp. The logic behind all this is straightforward: projection lamps are costly to replace. In any installation where the unit is in heavy use, many would like to see more “lamp-free” projectors. Currently, LED-light engine and a few “hybrid” LED/Laser DLP projectors fill this bill. There is still a price premium in the lumens to price ratio for lampless, but the gap will narrow with economies of scale. Last year at ISE, ViewSonic showed Laser Hybrid LED projectors. Casio was actually the first out of the gate a couple years back, with their LASER & LED hybrid light source projectors (they now have up to 3500 lumen output). Optima also came in last year with their EcoBright series with 2000 lumens of brightness. All were at ISE. Mitsubishi LaserVue projectors debuted yesterday at ISE. LG’s “Hecto” projector is not being shown yet, but is ostensibly coming in March. From ISE 2013 also came the announcement from Panasonic that the visual solutions group will now start shipping their new series of LED/Laser combined light source DLP projectors, the Solid Shine series. (Last June at InfoComm Panasonic showed the projectors and said then they’d be shipping in January. They’ve made good on their word.)

And yes, you would count on Sony to be different. They are. Sony teased the industry last June at InfoComm, with strictly private demos of this product. But Sony announced at ISE 2013 this week that it is launching its next generation WUXGA installation projector with “Laser Light Source Technology.” Sony has never used DLP for projectors. They’ve always done either LCD, or LCoS. So no surprise on that count. This new projector will be the world's first 3LCD laser, 4,000 lumens WUXGA (1920 x 1200) projector, making” it according to Sony, “the brightest projector of its kind and a first for the industry". The first LCD-based (not DLP) laser light engine projector? Yes (in this class– the low lumen, classroom/boardroom/digital signage applications, not Cinema). Wide format, kinda unusual for this class of projector? Yes. Brighter than the DLP variety? By a bit.

More to the traditional “flat” display signage side:

LED display manufacturer Lighthouse Technologies announced at ISE the launch of X3, the latest product in its indoor portfolio of large-scale LED video displays. With a 3.9mm pixel pitch, X3 is Lighthouse’s highest resolution LED screen to date and opens up a new world of creative possibilities for the indoor rental and staging market.

Christie announced at ISE that its Interactivity Kit is now shipping. The Interactivity Kit is a solution for adding multi-touch interactivity to any digital display. Also at ISE, Christie told some attendees that it will use Corning's Gorilla Glass in a 55" LCD display. Gorilla Glass is the trademark for an alkali-aluminosilicate sheet glass manufactured by U.S. glassmaker Corning. At ISE, Christie showed its new WeatherAll Series of LCD outdoor flat panels. The Christie FHD551-W features optically bonded glass for “protection against harsh impacts and scratches in public display environments while enhancing viewability in outdoor venues by reducing reflection. It is designed to provide high contrast ratio, rich vibrant colors, and superior brightness to overcome high ambient light — making it perfect for outdoor use.”

Lighthouse Technologies has launched their X3, with a 3.9-mm pixel pitch. This is highest resolution LED display that Lighthouse has offered. The use of 3-in-1 Surface Mounted Device (SMD) LEDs enables X3 to deliver 140° horizontal and vertical viewing angles.16-bit processing and Lighthouse’s M4 color processing technology deliver ultra-high contrast ratio and 2,000 nits of brightness. So far, that’s been mostly Barco Territory. But more interesting: this is a “flexible” screen. That’s been the forte of late, of Nanolumens. Nice to see Lighthouse here. Developed in conjunction with XL Video, X3 combines Lighthouse’s processing and a mechanical design developed by XL Video, resulting, according to Lighthouse, “in a unique curable and flexible joint structure that allows the screen to be shaped in different ways to become concave or convex both horizontally and vertically, so you can wrap it, bend it and twist it.”

Lighthouse Technologies X3 LED screenFor Barco’s part, not much in terms of news at ISE about Barco’s recent (majority stake) acquisition of projectiondesign. Barco showed at ISE a new video wall that’s unique and ambitious. Barco’s OBLX-4610 is an LCD video wall structure, capable of holding 46"-panels in a 2x2 landscape mode setup. Alternatively, a 3x1 wall in portrait mode is possible as well. Because these structures can be easily combined next to each other, there are no limits to the horizontal extension. Being a free-standing structure, the OBLX-4610 can be integrated at any location, as free standing. This, according to Barco, “further expands the applicability of video walls, allowing them to be placed e.g. in shop windows, at art exhibitions, and in temporary crisis coordination centers. The design trim protects the sensitive narrow-bezel LCD edges making the walls less vulnerable for contact.”