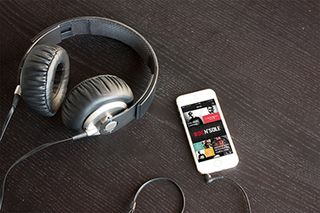 A recent report by ABI determined that beacon networks will reach 60 million devices by 2019. While the growing trend has been monopolized by the use of dedicated hardware devices emitting Bluetooth Low Energy signals, one startup has provided a way for audiovisual companies to penetrate the beacon market.

LISNR markets to consumers through inaudible “smart tones” that we cannot hear, but our phones can.

Meet LISNR, a technology company that markets to consumers through inaudible “smart tones” that we cannot hear, but our phones can. LISNR has tapped into the potential of audio and video to transmit these signals directly to consumers’ mobile phones through encrypted tones in audio files. For example, a sports stadium may use the technology to send mobile updates about the game to a fan who has left their seat to grab a beer or use the restroom. LISNR can also be used in a media environment, to trigger content on a viewer’s phone while a TV show or album is playing, such as behind-the-scenes video footage.

After closing an impressive $3.5 million round of funding, LISNR’s co-founder and CEO, Rodney Williams, is looking towards the possibility of future audio integration.

Whereas Apple’s iBeacon uses a dedicated hardware device to signal one’s iPhone, LISNR encrypts its smart tones directly into audio files, providing the opportunity for commercial audio and video products to operate directly in this market.

“The beauty of LISNR is that you can do more with your current infrastructure, using [equipment that] you’re already spending energy developing and building,” Williams said.

The idea for LISNR came to Williams while he was still working in brand management at Procter & Gamble. At the time, he was the first marketer to co-write digital patents. Williams used his marketing and digital savvy to dream up a broader way to use beacon networks.

“When they were talking about using iBeacons in a retail environment, I was thinking, how can I use an audio smart tone to trigger a more relevant kind of experience,” Williams shared.

He found his answer on a crowded “startup bus” en route to Austin, TX, from Ohio. Within 72 hours Williams had assembled a team and launched the first version of LISNR at the SXSW festival.

More than a year since LISNR unveiled its beta, the startup is now talking to advertising companies who deploy digital signage and AV solutions, like Clear Channel Outdoor. According to Williams, LISNR can add value to these experiences by providing advertisers with additional revenue streams and analytics about their target market. And added value means increased integration of commercial AV solutions.

“Digital signage companies can use their current infrastructure and our smart tones to trigger mobile content experiences for the consumer. What’s incredibly attractive is the smart tones can provide analytics and validate who’s in the presence of your visuals,” Williams shared.

As LISNR evolves, exclusive partnerships with audiovisual suppliers may be in the works. The company is also in the very early stages of discussing the development of “LISNR-certified speakers,” as Williams called them, with a dedicated speaker manufacturer.

“We want partnerships and relationships for the other pieces,” Williams said. “We really want to perfect the smart tone and do it well. But we also want to have our beacon guy, and we want to have our speaker guy.”