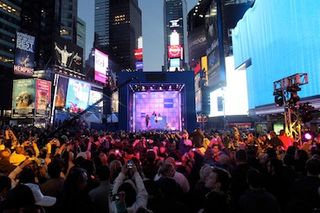 Ten of thousands of fans turned out to watch singer-rapper Nicki Minaj perform live and celebrate the launch of the Windows-based Nokia Lumia 900 smartphone in North America at an event featuring audio and lighting support from WorldStage, the new brand for Scharff Weisberg and Video Applications Inc.