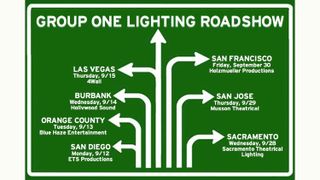 Avolites and elektraLite’s US distributor, Group One Ltd., is setting out on the second leg of its 2016 Lighting Roadshow, which will be stopping at seven dealer locations throughout California and Nevada during September. Offering hands-on demos of the two lighting brands’ newest tools and technologies, the tour will additionally showcase products from DTS Lighting.

Dates and host sites will include the following:

“The first leg of our Lighting Roadshow, which visited dealers in New Jersey, Washington DC and three sites in Florida, was a complete success on all accounts and a lot of fun,” noted Tyler Wise, Group One’s national sales manager for the elektraLite brand. “It’s now the West Coast’s turn to have a chance to get ‘up close and personal’ with elektraLite’s newest never-before-seen fixtures, Avolites’ latest Titan v10 software enhancements and DTS’ exciting range of offerings.”

Roadshow open houses are free to the public and will run from noon to 4:00 p.m. RSVPs are encouraged, if possible, and can be made via: www.g1limited.com/roadshow Full catering will be provided for each stop of the tour.

Products showcased on the tour will include:

Avolites: Titan v10 is the result of a year of research and development by a dedicated team of Avolites developers, enhancing the best-loved features of Titan v9 and introducing a wealth of new ones created in response to user and industry feedback. Avolites will also be carrying a collection of its most popular consoles, including Sapphire Touch, Tiger Touch II and the new Arena and Quartz desks.

DTS Lighting: DTS products are key players in astonishing lighting rigs all over the world, from TV studio lighting to lighting designed for historical and modern architecture, light shows for big international tours and lighting for events, theatre shows, exhibitions, and expos. All products are entirely designed, realized and manufactured in Italy.