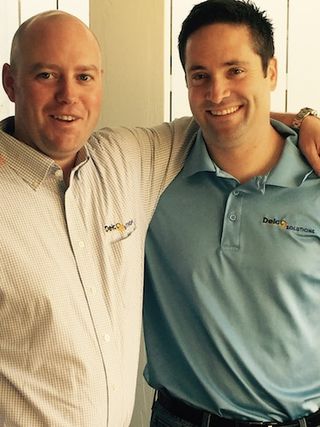 The way Doug Murray sees it, the quicker technology moves and changes, the more it means sales and success for his company, Delco Solutions (www.delco-solutions.com).

This multi-purpose room AV system at a retirement community was designed by Delco Solutions.“We’re a small, niche, service-oriented AV company with a strong background in network and wireless technology,” said the managing partner. Headquartered in Sharon Hill, PA, Delco serves customers in Delaware and Montgomery Counties, as well as Philadelphia, west to Pittsburgh, and Maryland. About 75 percent of its projects are in the K-12 market. “We’re competitive, but we generally don’t bid on jobs. We’re design/build, and that’s how I go into client meetings.”

Murray, 36, and his partner, Kevin Basquill, 35, formed their company in early 2012. Each brought a different skillset, but they shared a desire to get ahead of the curve of the coming merger of the AV industry with IT/networking.

“Kevin had his own consulting company, Delco Consulting, that was focused on computer networking, and that morphed into AV installations,” Murray explained. “He had some very good techs, who have now joined us, but he had no relationships with manufacturers,” Murray said. “I worked for a local AV company as an account executive, and I was selling Kevin a lot of hardware.”

When the two realized that a lot of the large, traditional AV contractors were not addressing the merging of IT/networking, they determined that they could create a real presence in the industry. “Everybody is afraid of the word wireless, but I don’t see it getting to the point where there will be no hardwire connectivity,” Murray said. “You will always need hardwire.”

Murray was able to bring some of his former K-12 customers to the newly formed Delco Solutions, and some of Basquill’s former clients came as well. In its first year, Delco did one million dollars in sales, and more than two million in 2014. “This year, we hope to do three million,” Murray said. “Our goal is to grow by adding more Fortune 500 accounts and getting to higher ed. Currently, more than half of our work takes place in the summer months, but corporate and higher ed projects are year round.”

One challenge has been in finding qualified installers. “I still don’t know how to find good people for the industry,” he concluded. “I think the best way is to just bring them up through the ranks and keep them happy. We have three good ones and our lead tech is minority partner.”

Going Social
As Gen Xers, the partners quickly realized that they needed to differentiate themselves in a crowded industry. “Traditional AV companies are used to doing business in a certain way, but all the technology changes are great for us,” Murray said. “We grew up with smart boards and projectors—I was running a projector rental business when I was 18—and we’ve seen many changes already. The generations just coming up now have been around technology their whole lives. But there will always be a place for pro installation and expertise, even with wireless.”

Delco Solutions partners, Doug Murray (left) and Kevin Basquil (right).Initially, Delco attracted customers through referrals and did well. What was missing was the social networking/SEO element—the social networking element to get that “snowball effect” from Google to the company website, and on to social media sites.
So Murray called a friend. And that friend is a headhunter.

Enter Doug Foulkes, 27, Delco’s director of marketing. Foulkes had worked for a handful of non-AV startups creating business plans and marketing materials. “I took an interest in web marketing because there’s always something new to learn, and you have to stay current on the latest trends to remain competitive, just like the AV industry,” he said.

The Delco web presence was the first area he targeted for gaining ground. “Because we are selling the latest and greatest technology to enhance communication and productivity, either in a classroom or office setting, our own way of reaching target markets should be just as cutting edge,” Foulkes said. “Staying current with the latest web-marketing trends is as simple as subscribing to a few good blogs and reading them religiously. All the information you could ever need is out there, and it costs you nothing if you’re willing to do the research.”

A company website is its digital storefront, Foulkes added, so it’s critical that it looks attractive and that its content appeals to ideal customers. “We believe in cultivating strong relationships with our customers to form lasting partnerships, and that starts with their first impression of us. This usually occurs online when potential customers are doing their due-diligence research. When they've passed the awareness stage of their decision-making process and have begun to research a company to see if they are a good fit, the next stage is consideration.”

The idea, Foulkes said, is to deliver top-of-the-funnel content to entice the right potential customers to start a conversation with the company. “That way, we can get to the root of what they want and need. We create buyer personas, hypothetical customers, such as a budget-conscious client, a facilities director, or someone who could be the tech evangelist in their office. That helps us understand what kind of content will be most useful on our website and blog. Good content should nurse a prospect through the sales cycle, and creating these personas helps us understand what information is the most useful for them.”

Delco also has a presence on every platform—Facebook, Tumblr, Twitter, and Google+, with some more developed than others. Recently, the company hired an outside firm to post content for them. “We’re trying this out,” Murray said. “We’re always trying new ways to drive traffic to our site.”