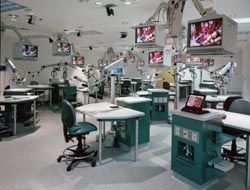 As more and more medical equipment becomes DICOM-compatible, so contractors are able to integrate them into a single system, smoothing surgeons' workflows and enabling doctors to gain a faster and more complete picture of a patient's condition and the procedures used to treat it.
"When we approach the AV integration of medical facilities, it's done on several levels," said Mark Alspach, principal at Shen Milsom & Wilke (SMW) in New York, NY. "The first is to enhance the visualization within the operating room or OR-bringing together the various things that generate images such as endo-cameras and fluoroscopy machines. In an un-integrated room, these would be viewed using their own monitors. When we come in, we add more monitoring-wall-mounted or boom-arm mounted, and controlled via a touchpanel."

But while there may by a common image format for medical hardware, the presence of multiple video standards in ORs can pose its own challenge to system designers. "HD-SDI is becoming more prevalent, DVI is a standard, and RGB-HV is as well, so the ability to mix those onto a common platform is very desirable in a digital OR environment," said Paul Hand, product manager for the AutoPatch group within AMX. "We accomplish that with our Optima series, which has been an incredibly successful product line for the medical market. All the signals remain in the same format, so they maintain their integrity, but the integrator gets all these mini-switchers in a common box, with a common control port and a common power source."

The need to establish a flow of easily transportable image files while maintaining quality becomes even more important when hospitals need to distribute their PACS data around their facility, as Hand explains: "Hospitals have a large number of secondary uses for the imaging that's being captured by a surgical procedure. But the data can't be accessed unless you're treating the image properly and going through a proper matrix switching product."

Alspach says that SMW regards the distribution of PACS files beyond a digital OR, but still within its host facility, as the "second level" of possible integration in the medical sector. "Typically we bring the AV to the labs so that the pathologist can see what's going on in the OR, which is useful when they need collaboration between the surgeon and the pathology lab. We also distribute to observation rooms and, if the facility has an educational dimension, to lecture rooms so that students can view procedures while they are in progress."

If these Q&A sessions are to be meaningful, projected image quality in the classroom has to meet the facility's standards. This was the catalyst for Norwegian manufacturer projectiondesign to release a DLP projector optimized specifically for the medical market: the F20 sx+ medical. "This projector offers the integrator certain features and adjustments to replicate medical imaging to DICOM standards," said Anders Loekke, marketing communications manager at projectiondesign. "This allows us to perfectly replicate the profiles of calibrated LCD monitors-for example, the blue or the white tint of standard analog x-ray images.

"Currently there is no medical certification body that looks at DLP projectors, which means they're not allowed to be used for diagnostics. So they tend to be used for training facilities," Loekke continued. "We view it as a specialized educational application. Sometimes the projectors are used side by side for 'before and after' imagery. Or they can be used for larger groups. A 20-inch monitor can only be viewed by two or three people at a time; a projected image can be viewed in a typical medical classroom by 10 or 12."

Critical Information
For SMW, a third level of medical integration has evolved in the form of the 'wall of knowledge'-an innovation recently installed at New York's Memorial Sloan-Kettering Cancer Center (MSKCC). This consists of four large, wall-mounted, high-definition displays that provide complete, real-time patient information. The 'knowledge' displayed on the wall is generated by diverse information systems, physiological monitors, and medical devices. It also includes video of the ongoing surgery, current laboratory data, and radiology images.

"We see the 'wall of knowledge' as a kind of co-pilot for the procedure," Alspach said. "As well as allowing you to view the sources in the room, it has an advanced software engine driving it that displays patient information contextually with the procedure. Most hospitals have a policy of what they call a reality check. Is this the right patient? What is the procedure? The wall of knowledge automates all that. It pulls the patient's records from the PACS and puts them on-screen.

"Then as the operation commences, the context and information change. You see things like the physiology of the patient and endoscopic information. Then when the op closes, you get a summary-the ability to make some verbal notes and add them to the record, and then take some decisions. Do you want to archive all this information? It's housekeeping-type stuff to speed up the closing and completion of the process within the OR."
But while innovations such as the 'wall of knowledge' open up fresh possibilities for medical integration, the critical nature of many medical procedures means that many projects confine themselves to the essentials for budgetary reasons-and because no compromise on quality and reliability is tolerated.

"We're very particular about the equipment we choose to go into an OR," McClain said. "We have told hospitals that we can't do what they want to do for the budget they have, and we won't save $1,000 here or $1,000 there if it means compromising on quality.