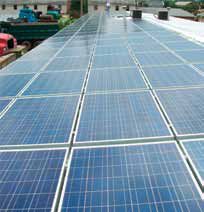 Light control manufacturer Lutron Electronics is collaborating with ANSI to develop standards for the national Smart Grid effort. The standards are being developed by ASHRAE and NEMA, providing a common basis for electrical energy consumers to describe, manage, and communicate electrical energy consumption and forecasts. These will define an object-oriented information model to enable appliances and control systems in homes, buildings, and industrial facilities to manage electrical loads and generation sources in response to communication with a “smart” electrical grid.

Northern Sound & Light (NSL), a pro audio and lighting dealer in Pennsylvania, has invested in a new solar power system as part of a larger green strategy. NSL’s solar power system is comprised of 117 photovoltaic solar panels feeding three current inverters. The system is estimated to produce approximately 25,170 kW annual average, enough electricity that NSL will achieve energy positive status and be able to sell electricity back to the utility.

BOLINGBROOK, IL—After a month-long promotion of its Peel-N-Go wire labels, Windy City Wire was able to donate $36,122 to the Central Savannah River Area (CSRA) Wounded Warrior Care Project, a nonprofit organization headquartered in Augusta, GA dedicated to creating the model for harnessing state, federal, and local resources that benefit wounded warriors. Windy City Wire’s donation check was presented at the KISS concert in Chicago, IL on September 3, where the band announced that its own contribution to the CSRA Wounded Warrior Care Project was at $312,668 as of that date.

BOSTON, MA—Gulf Coast Sound Productions recently deployed a 100-box Electro-Voice sound system at Boston’s Fenway Park for the premiere of the new film The Town. Incorporating three line arrays, surrounds, and a massive complement of subwoofers, the system maintained the 5.1 channel soundtrack’s clarity and dynamic range while bringing home the full impact of the explosive action.