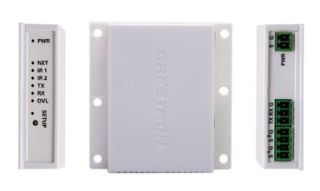 The INET-IOEX-RYIO provides a low-voltage relay and digital input control interface for remote devices such as garage door openers, sensors, motorized screens and other relay-controlled devices, while providing the same wireless communication to a Crestron control system. Using either or both modules, the connected device can then be controlled from any Crestron user interface such as a touchscreen, keypad, remote, or from any Apple or Android smart device.

“Now third-party IR, serial and relay controlled devices can be controlled wirelessly over long distances and integrated on the Crestron platform,” said Fred Bargetzi, Crestron vice president of technology. “Adding a room onto your Crestron system has never been this easy or inexpensive. No wires; total control. What could be better?”

At about the size of a deck of cards, INET-IOEX-IRCOM features one RS-232 and two IR control ports and can be mounted discreetly behind a display or inconspicuously on a wall near the desired device. INET-IOEX-RYIO provides two isolated relays and two digital input ports while communicating with a Crestron control system over the infiNET EX wireless network to enable control and monitoring of the remote equipment

infiNET EX Wireless Control Modules substantially reduce wiring and related labor costs of traditional wired installations. The result is a dependable wireless control solution for residential and commercial retrofits, historic buildings, long distances (up to 150'), and environments, such as those with custom stone work or brick walls, where pulling cable is not practical. In addition, the installer-friendly control module offers huge time savings for integrators, allowing them to get in and out of jobs faster.

“Whether in the office or in your home, you can now control almost any device from your Crestron touch screen or smart phone without worrying about the headaches of pulling wire and knocking holes in walls,” said Fred Bargetzi, Crestron vice president of technology. “IOEX modules put your favorite RF devices on the Crestron control network quickly and without making a mess.”