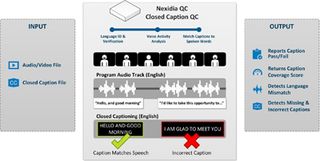 Nexidia has launched Nexidia QC, a software tool for automated closed caption and video description verification, closed caption alignment, and language identification for broadcast and IP workflows. Nexidia QC is designed to overcome the challenge of ensuring content is being created, edited, and distributed in the right languages with the correct captions at the right times. It automates manual processes, thus reducing operating expenses, and automatically identifies errors to avoid fines and improve quality for viewers.