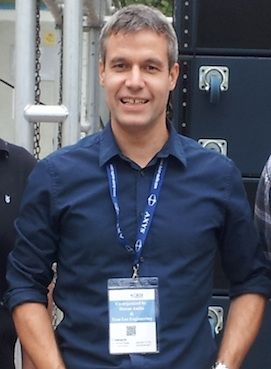 Dr. Evert Start from Duran Audio.
The What Else: In 2000, Dr. Evert Start from Duran Audio published a paper on Digital Directivity Synthesis at the IOA’s Reproduced Sound Conference in the UK. DDS is a technology that uses FIR filters to allow sound designers to control both the near field and far field dispersion of a loudspeaker array using a powerful algorithm from Duran Audio called Digital Directivity Synthesis. DDS was immediately implemented in AXYS Target Line Arrays and Intellivox arrays. DDS allowed users to electronically aim the sound where they want it; At the listener and to excite the audience and not the room. 13 years on Duran Audio continue to deliver AXYS Intellivox, Target & Beam Shaping Subwoofer products that make use of this revolutionary technology

DDA was originally developed to generate the FIR filters required to synthesize the correct dispersion from an Intellivox or Target array. Now in 2013, DDA is a full 3D modelling and prediction environment which is intuitive and user friendly and has features to suit both newbies and the power users.

The prime function of DDA is to allow designers to define and visualize the directivity of their arrays; aiming the sound where they want it (at the audience) and avoiding those areas where they don’t want it (reflective back walls, etc.). However, it doesn’t just stop there DDA also allows users to visualize and predict: Direct SPL, Total SPL, D/R Ratio, STI and Delay Spread. For those wishing to carry out RAY TRACING using AXYS products then DDA allows you to export the directivity files to CATT Acoustic or ODEON.

Previously 3D room models could be imported into DDA from Google SketchUp, CATT Acoustic or Odeon. In the latest version users can also build simple rooms using the 2D geometry builder. Which is ideally suited for simple set ups or touring applications.