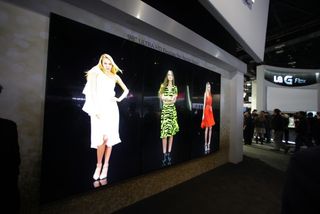 We haven’t done away with the stuff entirely, but these days our exchanges with colleagues, customers, and students is much less about paper and much more about screens. And, as smartphones have conditioned us to presume that every screen will do something if we simply press a finger up against it, the demand for displays that offer more than passive viewing—regardless of their form factor—is shaping how collaboration happens in both the enterprise and the classroom.

“The adoption of multi-touch capabilities has been explosive and is likely to continue,” noted Jennifer Davis, vice president of marketing and product strategy at Planar Systems Inc., a display manufacturer based in Hillsboro, Oregon. She adds that this, among other trends, is being driven by advances in technology and more affordable price points, as well as “more customers seeing what is possible with the technology.”

With video being ubiquitous in every facet of our lives, one wonders: what will display developers think of next? Largely, continued adoption of 4K (and, eventually, 8K), with a few twists.

4K is Still the Future…for Now

While 4K still remains in its infancy, it will become more prevalent in both the enterprise and higher ed as the price of the technology decreases, predicts Keith Yanke, senior director of product marketing at NEC Display Solutions, headquartered in Itasca, Illinois. “It will be a space where you will see the pricing drop significantly over the next few years, especially on these larger screen sizes once yield rates can come up,” he said. He also notes that the application of 4K resolution will continue to expand, whether it be from a standard PC all the way to multiple full HD resolutions on the screen at once, sourced from several different users.

And then, of course, there’s 8K, which is closer than some might think. “I believe it took us maybe four or five years to go from full 1080p to 4K, so we’re probably another four years away from really seeing 8K-type resolution in displays in the market,” said Rudolf Vitti, group manager for displays at Panasonic.

“When you look at video displays, they’ve got to be interactive—and ‘interactive’ can mean in various ways that we’re seeing now already with touch, or maybe gesture-based, or even things like Siri, where they’re voice-activated,” said Dana Corey, vice president of global sales at video wall and collaboration technology developer Prysm, based in San Jose, California.

Hand-in-hand (pun intended) with interactive technology is the amount of content that displays will be able to accommodate—a trend that Corey attributes to our increased comfort with consuming multiple sources of content on the same screen. “The convenience of giving me more data at one time is, I think, a future requirement around the video display,” he said. “You will see this increase in content, and dynamic window-sizing where you can re-size the content to fit the space and push things around, and really engage with the content you want when you want it.”

While brightness is a high priority, it also comes at a cost—not just for the actual technology itself, but the power that it traditionally consumes. Burt Smith, executive vice president for business development at display products manufacturer NanoLumens explains that one of the company’s missions is to deliver high output while keeping power consumption at a minimum. “It sounds like a simple feature, but it’s really a big deal,” he said, noting that the more power units consume, the more heat they generate, which then leads to increased need for climate control. “In casinos, for example, you can’t be projecting heat onto people; it makes them uncomfortable.”

Because they’re no longer simply there for passive viewing, questions around the application of display technology should focus on not only the display, but the experience it’s helping to create, Corey argues. “Truly, the best experience is when you don’t experience the technology; it’s when you just experience the experience,” he said. “[This means] displays that basically give you that non-technology feel, that integrate into the architecture, that integrate into the flow of life, whether it’s the enterprise, higher ed, or whatever it is. You just feel like you’re engaged with it.”

And sometimes this seamless integration into the landscape translates into display technology that is, quite literally, lighter. NanoLumens’ NanoClear is a slim, ultra-lightweight, clear display that uses nano-optical particle diffusion, giving the illusion that images are floating in space. “We can hang this sheet of plastic, which is millimeters thick and weighs virtually nothing in the context of display technology, and provide an experience that’s transparent and translucent,” Smith explained, “which allows you to set the mood in an environment very differently than if you were hanging a solid display there, or even if you used an LED curtain-type technology, or wall.”

Behind Every Good Display...What’s in Store for Projectors?

A number of manufacturers are making projection technology more accessible with the advent of fine-pitch LED systems. “That product could end up being part of the video wall and display space moving forward,” said Keith Yanke, NEC Display Solutions, which showcased its 2mm-pitch LED technology at InfoComm 2015. Yanke notes that fine-pitch LED won’t be reserved for the extremely large displays, such as commercial signage; it will also be applicable indoors, in spaces such as conference rooms. The catch? It’s expensive, for now at least.