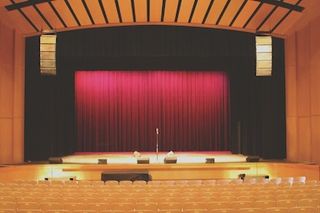 In 1960, when local citizen and banker Thomas H. Bowlus directed that his estate be used to benefit a cultural arts center, he may not have imagined that the Bowlus Fine Arts and Cultural Center in Iola, Kansas, would celebrate its 48th anniversary this year and a major audio upgrade.

MSM Systems in Lawrence, Kansas, was chosen to complete the upgrade in time for the center’s anniversary celebration. The 750-seat Bowlus Fine Arts and Cultural Center mission is defined as "to broaden the cultural background of area youth and make available to the citizens of the area facilities, programs and entertainment not otherwise available.” When the Center originally opened its doors in 1964, it welcomed such artists as Count Basie, Marcel Marceau, Jungle Jack Hanna, and Lionel Hampton, and more recently Big Bad Voodoo Daddy, to name a few.

“I had worked with MSM in the past and have been very pleased,” said Jeff Jordan, technical director at the Bowlus Center. “In determining a bid winner, customer service weighed in very high. Almost all of our shows occur in the evening and on weekends, so we needed a company that would answer the phone at 9:00 p.m. on a Saturday night if we had a problem. Working with MSM systems has turned out to be a great choice for the Bowlus Fine Arts Center. Everyone at MSM, from the owner to the intern, was on site and did a fantastic job. I wish every company we dealt with had this much passion and a great work ethic as the guys at MSM. The best people to work with are the ones that find solutions to problems they encounter that were unforeseen.”

“I chose NEXO speakers as the line array because they were the exact fit for the space,” said Kent Clasen, president of MSM Systems. “I demonstrated a GEO S12 system for Jeff, and he loved what he heard. When I told him it fit the Center’s budget, he was very excited.”

Clasen added that the Yamaha M7CL was a great choice for the Center because it can be used with ease at either front of house or monitors by visiting engineers. “The Bowlus’ previous system was in operation for almost 50 years, so we had to come up with a system that would last.”

Director Susan Raines and Jordan were very hands on in making sure they got the best system. “The decision to enhance our system was based on the requirement for increased clarity and coverage with the ability to do everything from just one presenter on stage to a full band and everything in between,” added Jordan. “The Bowlus has a very dynamic season every year; we do the local high school’s play, a community theatre musical, our local community college’s annual musical, the Bowlus’ Five Series Shows, and a Gospel concert series. The Bowlus needed an installed sound system that could do it all, rather than continuing to rent a system, and I believe we got one! This year will be the first time our local clients will be able to use a sound system of this quality.”