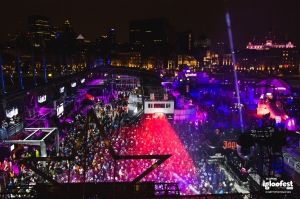 An aerial view of the Igloofest crowd in Montreal.
Montreal-based Karl Gaudreau of 4U2C was the visual/lighting designer for Igloofest 2015 creating the set, video and lighting for the unique music experience. Solotech in Montreal provided the equipment.

“I started working with Igloofest last year,” says Gaudreau. “A massive igloo remains for the four weeks of the festival, and the equipment is outside for that time in very low temperatures. We needed to be very careful about what we did and how we hung the rig.”

DJs and bands playing on two stages attracted approximately 10,000 people on each of the 12 nights of the festival. “I used only Clay Paky fixtures,” Gaudreau notes. “They were positioned throughout the stage and audience – I had them everywhere. The main stage had a big video surface and lights were in the crowd, too. They looked very, very cool.”

Gaudreau deployed 60 Sharpys, 16 Sharpy washes and 16 B-EYE K-20. He opted to use 26 Igloo domes from Clay Paky to protect the Sharpys. Clay Paky Igloos are sturdy, injection-molded enclosures for outdoor moving lights. They offer complete protection against the elements – a must for Montreal outdoors in winter.

“Last year we tested Clay Paky fixtures outside and had no failures for a month,” he recalls. “The quality of the units and their size and power are amazing. Especially for electronic dance music – they’re really powerful and really fast. They gave me a really cool look outside with all the snow.”

“Everything performed just great despite all the challenges Igloofest presents,” he reports.

Francesco Romagnoli, Clay Paky Area Manager for North and Latin America, added, “Our fixtures are perfectly suited to all environmental conditions and we’re proud to see them applied to another great and creative setting.”