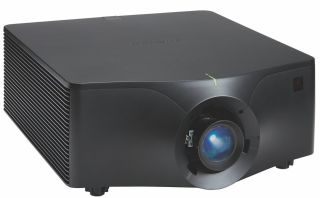 Christie GS Series
The What Else: The new models use a grid-based warping and blending processor and have an option for camera-based warping, blending, or stacking to make setups faster and simpler. They can also be rotated 360 degrees and used in portrait orientation, making them well suited for complex setups in rental staging and medium-sized fixed applications. At only 35 dBA, the projectors run quietly enough to not distract users. Lightweight and compact, the four new models deliver images using a laser phosphor light source with a 20,000 hour life for low maintenance and low cost of ownership.

“With two new HD and two more WUXGA laser phosphor models, Christie has a wide-ranging 1DLP lineup including both lamp and laser phosphor options ranging from 3,000 to 13,000 lumens without limiting options to one technology or another,” said Curtis Lingard, product manager, Christie. “Our customers said they still need the choice between lamps and laser phosphor, and Christie offers that choice.”

Featuring bottom-side HDMI connectivity and rear cover, the new Christie GS models can be ceiling mounted and have a clean look without unused connections, cables, and keypad remaining exposed. All RJ45 connections are fully compatible with the rugged and lockable XLR-shell connection to protect and avoid having to re-terminate cables onsite.

“Designed primarily for a digital workflow, the new models have a 3GSDI, DVI-D and two HDMI inputs but still allow for analog signal via an HD15 connection making the new GS models a perfect fit for live events and fixed installs,” added Lingard.