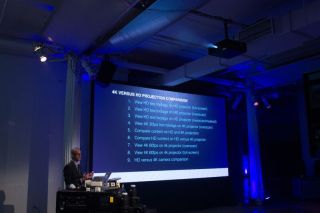 The Christie Digital 4K30 went up against Chrisite's own HD20K-J to show the advantages of 4K projections
Presented by WorldStage on July 29 in Manhattan, the hands-on work session illustrated the different levels of image quality achieved by comparing HD projection to 4K projection. A Christie Digital HD20K-J HD projector and Christie’s new flagship projector, the Boxer 4K30, went head-to-head displaying the same content. WorldStage engineers created a content stream that allowed the audience to compare HD video with native 4K video in 30 and 60 fps formats.

Presenter Josh Weisberg, President and COO of WorldStage, walked the audience of 125 clients and associates through different content forms and formats, pointing out where 4K projection may provide a significant benefit over HD video projection. Guests learned all they needed to know about 4K display, workflows and components.

“After the audience reviewed pre-recorded content, the final demonstration compared a live HD video and live 4K video,” Weisberg explains. “You could hear the crowd murmuring in astonishment at how detailed and lifelike the 4K camera image appeared on the 4K projector.”

Both resolutions were compared at 30 and 60 fps formats
The WorldStage presentation of 4K display magic was co-sponsored by Rentex equipment rentals, Clark Media, Christie Digital and Six-Point Brewing company.