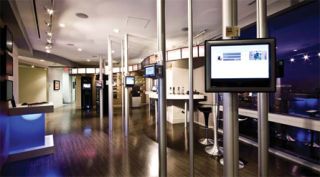 AMX Las Vegas Device Discovery Center features an interactive demonstration platform for more than 350 AMX products. All this technology, along with building HVAC, is fully integrated with AMX’s Resource Management Suite to demonstrate real-time equipment monitoring and energy management. In total, the showroom includes more than five miles of network, AV, and fiber cables. The center also includes a full-size boardroom complete with videoconferencing capabilities, a second conference room, a multi-purpose room, and a full-time Training Center for AMX University

The showroom at the Device Discover Center mirrors the AMX New York showroom. Both showrooms offer examples of AMX technology at work, providing an interactive environment where customers can experience the real world applications of AMX technologies and software.

INDIANOLA, MS—The B.B. King Museum and Delta Interpretive Center opened with a three-day celebration and concert that paired the blues legend with several of the marquee artists he has inspired. The main stage featured twin ground-stacked Peavey Versarray 212 line-array arrangements, configured with four Versarray 212 line arrays and two Versarray 218 subwoofers per side, and powered by 16 Crest Audio Pro 9200 amplifiers.

“A lot of our customers have been asking us to produce a smaller console, but we didn’t want to use cheaper filters, controllers, or mic preamps,” James Gordon, managing director of DiGiCo, told SCN. “What we’ve done instead is to take a different approach to manufacturing which has enabled us to price the SD8 very competitively. Not only is it the cheapest console we’ve ever made,

The SD8 is being assembled on a dedicated production line in Scotland, and Gordon commented: “Rather than use extruded aluminium, as we have before, the SD8 has a steel chassis which is easier to manufacture in volume. But the main thing for us is that is still extremely powerful, with up to 60 mono or stereo channels—the equivalent of 120 channels on a DSP console.”