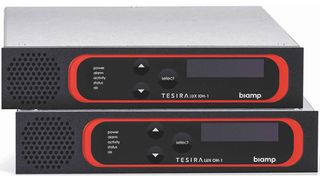 Biamp is now shipping its TesiraLUX product line of video streaming solutions to its global base of customers.

A Single Software Environment for Networked Audio and Video

While video over Ethernet is nothing new, Biamp sees increased value in offering a holistic ecosystem for networked audio and video. TesiraLUX natively integrates with the entire Tesira platform, therefore installers and tech managers can use a single software environment for both audio and video. It integrates streaming video with audio DSP; no breakout boxes or workarounds are required to get audio and video signals to work together.

TesiraLUX supports advanced video formats including 4K, 4096x2160 at 60Hz, high dynamic range (HDR), and the Rec. 2020 color space. It can accept video at up to 16-bit color depth with 4:4:4 chroma subsampling. It also supports eight channels of embedded PCM audio which can be broken out to be routed and processed independently. 1GB and 10GB connections are supported.

“AVB is the sanest and fastest way to manage network bandwidth usage and traffic for applications streaming audio and video,” Chris Fitzsimmons, Video Products manager of Biamp Systems, told AV Technology magazine yesterday. "It sets up faster, doesn’t require chattier protocols (such as IGMPv2) and won’t force the client into unnecessarily provisioning their switch infrastructure to ensure no bottlenecks occur.”

Fitzsimmons added that TesiraLUX also does not use special networking technologies (e.g. Jumbo Frames) which can interfere with other switch traffic.

The Networked Landscape: Where Does AVB Fit?

With 132 manufacturers shipping its products, Audinate’s Dante is the best-supported audio protocol, far outstripping the other technologies combined. But AV/IT industry stakeholders, including Cisco, Meyer Sound, and Biamp, believe in the potential of open standards such as IEEE AVB/TSN as technologies evolve. An often misunderstood element of AVB/TSN is that they are not communications protocols. Like VLAN and Power over Ethernet, AVB/TSN are core network capabilities that can be used by any (open or proprietary) communications system that needs them.